One of Kokoschka’s teachers suggested he pursue a career in the fine arts after being impressed by some of his drawings. [2] Against his father’s will, Kokoschka applied to the Kunstgewerbeschule in Vienna, now the University of Applied Arts Vienna. He received a scholarship and was one of few applicants to be accepted. [2] The Vienna Kunstgewerbeschule was a progressive school of applied arts that focused mainly on architecture, furniture, crafts and modern design. Unlike the more prestigious and traditional Academy of Fine Arts Vienna, the Kunstgewerbeschule was dominated by instructors of the Vienna Secession. Kokoschka studied there from 1904 to 1909, and was influenced by his teacher Carl Otto Czeschka in developing an original style.
During World War II, Kokoschka painted anti-Fascist works such as the allegory What We Are Fighting For (1943). [10] Kokoschka left the bustling city center of London and settled in Polperro, in Cornwall. While residing in this seaside village, Kokoschka made paintings depicting landscapes of the harbor, along with The Crab, which began a series of works embedded with political allegories resisting the Nazi regime. [5] Kokoschka’s The Crab was painted between 1939 and 1940, and captures the view of the harbor from the artist’s house in Polperro. This work functions as a self-portrait of the artist, where Kokoschka is the swimmer representing Czechoslovakia. The large crab is symbolic of Neville Chamberlain, the British Prime Minister at the time the painting was created. In explaining this painting, Kokoschka said the crab “would only have to put out one claw to save him from drowning, but remains aloof.” [16] Further, this painting demonstrates the instability he felt as a result of German occupation forcing him to seek refuge in other countries across Europe. This landscape painting, amongst others by Kokoschka, were brought with him to London unfinished where they were transformed into political allegories. [16] While in London, Kokoschka also painted The Red Egg, another political painting referencing the destruction of Czechoslovakia. [13] In this satirical painting, Kokoschka comments on the Munich Agreement of 1939 with grotesque caricatures of Benito Mussolini and Adolf Hitler. 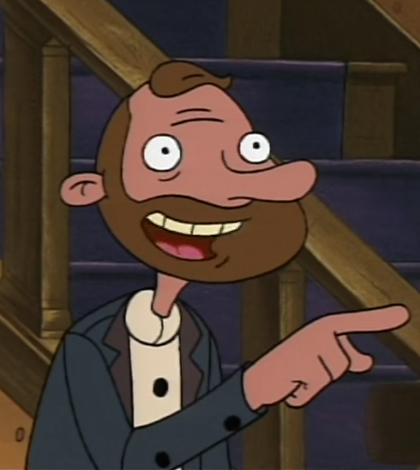 It is first revealed in the episode “Oskar Can’t Read?” that Oskar was illiterate. This could be the reason why Oskar has a hard time finding a job. Arnold was the first to discover that Oskar couldn’t read and volunteered to help him. Soon after the other borders found out. Ernie then placed a bet that Oskar couldn’t learn to read by the end of the month. Of course, money is Oskar’s most important consideration. Oskar gives Chocolate Boy chocolate in exchange that Chocolate Boy reads him the first page of “A Tale of Two Cities” by Charles Dickens in order for him to memorize it and cheat. His plan works at first, but Ernie switches the books and uncovers Oskar’s cheating, disappointing Arnold and the others. Oskar finally decides that he wants to read and Arnold tutors him. Oskar’s final test is to navigate home using directions given to him by Arnold, from an unknown part of town. After hours of waiting, Oskar finally makes it home, proving that he can read. Arnold’s teaching paid off because in the episode “Summer Love,” Oskar reads a store sign without any trouble.
Suzie is Oskar’s hardworking wife and his source of income. She is obviously the breadwinner in the marriage. Oskar and Suzie constantly clash because Suzie is angered that Oskar is unemployed and spends all of their money at the race track betting on horse races. It is not an uncommon scene in the boarding house to see plates being thrown at Oskar from his apartment. At one point, Suzie threw Oskar out of their apartment and Arnold allowed Oskar to stay in his room. After a while, Arnold realized how much of a freeloader Oskar really is and decided to work to get the couple back together. Oskar has shown to love his wife dearly in that same episode. As revealed by Craig Bartlett in a Reddit AMA, at some point before Hey Arnold!: The Jungle Movie, Suzie divorced Oskar and moved out of the boarding house.

Does this text contain inaccurate information or language that you feel we should improve or change? We would like to hear from you.
Like most of the paintings completed during Kokoschka’s stay in London, this portrait of Soviet Ambassador Ivan Mikhailovich Maisky has strong political significance. Maisky was closely involved in drawing up the Anglo-Soviet Alliance, after the breakdown of the Nazi-Soviet pact in 1941. Behind him is a statue of Lenin, and a globe turned to display the USSR. Kokoschka later recalled that the Ambassador was reluctant to talk, and hid his face in The Times during many of the 30 sittings.

In 1927, the hitherto biggest solo exhibition of Kokoschka’s work took place in the Zurich Kunsthaus and was a reason for the artist to travel back to Switzerland. The fact that only one of the 101 oil paintings in the exhibition was from a Swiss collection – that of Oskar Reinhart – is proof of the great organizational talent of the then Kunsthaus director, Wilhelm Wartmann. Between 1913 and 1947, Wartmann would show works by his favourite artist in a total of ten exhibitions. Wartmann would all too gladly have incorporated the triptych The Battle of Thermopylae (painted in Villeneuve in 1954) into the new Kunsthaus building, but the work was already promised to the University of Hamburg. Even after the end of the ‘Wartmann era’, it was unimaginable that Kokoschka might not figure on the exhibition programme of the Zurich Kunsthaus. On the occasion of his 80 th birthday in 1966 and again in commemoration of his hundredth birthday in 1986, the Kunsthaus honoured him with large exhibitions.
The first reason for the artist to return to the Continent after his nine-year exile was the large retrospective of his work in the Basel Kunsthalle in early 1947. This happy re-acquaintance with 65 paintings and almost 200 graphic works made it clear to Kokoschka that more had in fact survived the war unscathed than he had hoped for. After the opening, he wrote euphorically to his sister in Prague: ‘I have in nine days in Basel achieved more, a thousand times more, than in 9 years in London’. In view of the stream of visitors, the director of the Kunsthalle, Lucas Lichtenhan, wrote that Basel had turned into ‘a bastion of O.K.-ism’. Kokoschka remained almost the whole year in Switzerland, organizing his career prospects and contacts with Swiss art patrons. He painted landscapes, portraits and published samples of his literary work in the Neue Zürcher Zeitung. Werner Reinhart, a patron of music from Winterthur, made it possible for Kokoschka to stay for longer periods in Sierre, during which Kokoschka painted a portrait of his host – though to Kokoschka’s great disappointment, Reinhart did not buy it. On the Riffelalp, at the foot of the Matterhorn, the painter finally found an ideal place to set up his easel and he straightaway made two paintings of views of the mountain. When the Basel exhibition moved in the summer of 1947 to the Zurich Kunsthaus, Kokoschka was already able to add two landscapes of the Valais Alps.