As well as abstract art Mondrian was also passionate about dancing! Apparently he didn’t like slow traditional dances like waltzes or tango, but enjoyed high energy, fast dancing styles! He even called one of his abstract paintings Broadway Boogie Woogie after a popular dance of the time.
Squares, straight lines. and dance moves! Explore the abstract art of Piet Mondrian

In 1926, Katherine Dreier, co-founder of New York City’s Society of Independent Artists (along with Marcel Duchamp and Man Ray), visited Piet Mondrian’s studio in Paris and acquired one of his diamond compositions, Painting I. This was then shown during an exhibition organized by the Society of Independent Artists in the Brooklyn Museum – the first major exhibition of modern art in America since the Armory Show. Dreier stated in the catalog that “Holland has produced three great painters who, though a logical expression of their own country, rose above it through the vigor of their personality – the first was Rembrandt, the second was Van Gogh, and the third is Mondrian.”
In 1931, Piet Mondrian jointed the Abstraction- Creation line, which was more open to new styles, to new techniques, and to a difference in styles of work, which the artists would create. In 1932, a major retrospective exhibition of Mondrian’s work was held at the Stedelijk Museum, in honor of the artist’s 60th birthday. It was around this time that the painter began to be fascinated with the idea of the line and dismantling the very definition of painting. Drawing and draughtsmanship – exemplified in the line -, he argued, had always lain at the heart of painting, from the Renaissance artists to the Impressionists to the Modernists, and no one had ever thought to challenge that.

From 1934 to 1935, three of Mondrian’s paintings were exhibited as part of the “Abstract and Concrete” exhibitions in the UK at Oxford, London, and Liverpool. [28]
In 1911, Mondrian moved to Paris and changed his name, dropping an ‘a’ from Mondriaan, to emphasize his departure from the Netherlands, and his integration within the Parisian avant-garde. [11] [22] While in Paris, the influence of the Cubist style of Pablo Picasso and Georges Braque appeared almost immediately in Mondrian’s work. Paintings such as The Sea (1912) and his various studies of trees from that year still contain a measure of representation, but, increasingly, they are dominated by geometric shapes and interlocking planes. While Mondrian was eager to absorb the Cubist influence into his work, it seems clear that he saw Cubism as a “port of call” on his artistic journey, rather than as a destination.

Up to the turn of the century, Mondrian’s paintings followed the prevailing trends of art in the Netherlands: landscape and still-life subjects chosen from the meadows and polders around Amsterdam, which he depicted using subdued hues and picturesque lighting effects. In 1903 he visited a friend in Brabant (Belgium), where the calm beauty and clean lines of the landscape proved to be an important influence on him. When he stayed on in Brabant the following year, he experienced a period of personal and artistic discovery; by the time he returned to Amsterdam in 1905, his art had visibly changed. The landscapes he began to paint of the surroundings of Amsterdam, mainly of the Gein River, show a pronounced rhythmic framework and lean more toward compositional structure than toward the traditional picturesque values of light and shade. This vision of harmony and rhythm, achieved through line and colour, would develop toward abstraction in later years, but during this period his painting still remained more or less within the traditional boundaries of contemporary Dutch art.
Mondrian began to study drawing at age 14, but, at the insistence of his family, he obtained a degree in education. Instead of looking for a teaching position, however, he took painting lessons and then moved to Amsterdam to register at the Rijksacademie, taking drawing lessons. 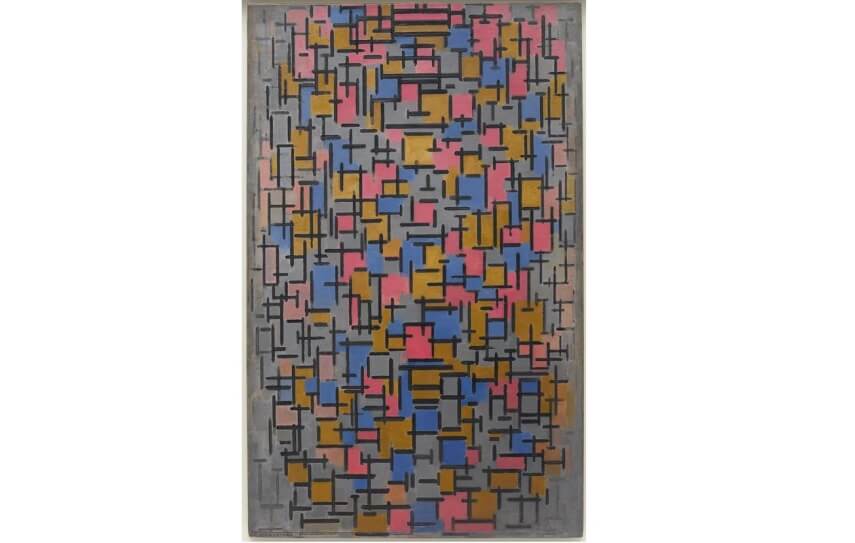 Piet Mondrian – Composition II in Red, Blue, and Yellow, 1929. Oil and paper on canvas. 59,5 cm × 59,5 cm (23.4 in × 23.4 in). National Museum, Belgrade, Serbia
There are multiple views on abstraction through reduction. Some believe it hides what is real. Others believe it reveals what is essential. Some consider it to be the same as generalization, and therefore interpret it as inherently incomplete. Through Neo-Plasticism, Mondrian presented a confident point of view on this topic. Mondrian believed that reduction was essential in order for humans to achieve our highest state of existence. He believed that complications are manifestations of the basest elements of human nature, and that petty details lead us to focus on our vast individual differences, preventing us from achieving a sense of universality. By seeking what is most simple, most essential and most relatable to all he attempted to create a new and completely abstract visual language, one that could be relatable to everyone who encountered it and could connect us all in a profound and universal way.