Franz Moritz Wilhelm Marc (February 8, 1880 – March 4, 1916) was a German painter and printmaker, one of the key figures of German Expressionism. He was a founding member of Der Blaue Reiter (The Blue Rider), a journal whose name later became synonymous with the circle of artists collaborating in it.
With the outbreak of World War I in 1914, Marc was drafted into the German Army as a cavalryman. By February 1916, as shown in a letter to his wife, he had gravitated to military camouflage. His technique for hiding artillery from aerial observation was to paint canvas covers in broadly pointillist style. He took pleasure in creating a series of nine such tarpaulin covers in styles varying “from Manet to Kandinsky”, suspecting that the latter could be the most effective against aircraft flying at 2000 meters or higher. [3] 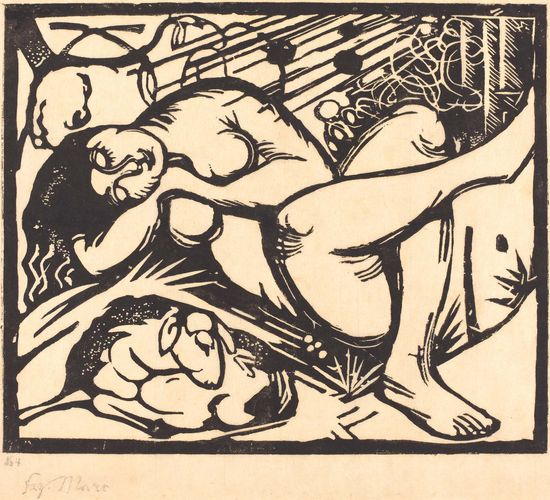 Marc’s philosophy can be seen in works such as Blue Horses (1911), in which the powerfully simplified and rounded outlines of the horses are echoed in the rhythms of the landscape background, uniting both animals and setting into a vigorous and harmonious organic whole. In this painting, as in his other mature works, Marc used a well-defined symbology of colour: blue, yellow, and red each stood for specific emotional qualities.
In 1910 Marc met the Russian-born painter Wassily Kandinsky, who was a member of a group of Expressionist artists known as the Neue Künstlervereinigung (“New Artists’ Association”). Marc joined the group in 1911 and worked closely with another member, the young painter August Macke, whose idiosyncratic use of broad areas of rich colour led Marc to experiment with similar techniques.

In 1910 he gets acquainted with August Macke and in the same year he joins the New Artists’ Association, Munich (Neue Künstlervereinigung, or NKVM). But already in 1911 Franz Marc splits off from NKVM together with Macke, Kandinsky and other artists in order to take part in arrangement of something completely new. The Blue Rider circle of artists becomes the flagship, bringing the new meaning of arts of the new century. Read about the circle of artists in more detail here.
Franz Marc (February 8, 1880, Munich – March 4, 1916, Battle of Verdun) is a German painter, one of the key figures of the German Expressionism. Marc actively participated in setting up and operation of Der Blaue Reiter (The Blue Rider) circle of artists together with Wassily Kandinsky and August Macke. 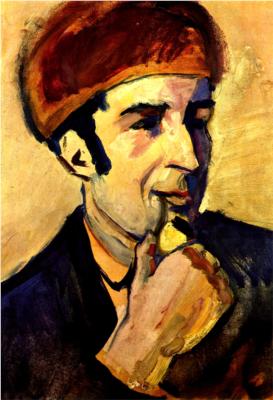 After mobilization of the German Army, the government identified notable artists to be withdrawn from combat for their own safety. Marc was on the list but was struck in the head and killed instantly by a shell splinter during the Battle of Verdun in 1916 before orders for reassignment could reach him.
Franz Marc was born in 1880 in Munich, then the capital of the Kingdom of Bavaria. His father, Wilhelm Marc, was a professional landscape painter; his mother, Sophie, was a homemaker and a devout, socially liberal Calvinist.

Franz Marc was a German print maker and artist; he not only had an influence on art during his time, but was considered to be one of the key figures of the Expressionist movement in Germany following his time as well. The Blue Rider, was a magazine publication series, which he was a co-founder of; it focused on the movement, and it was well known to be connected to a small group of artists who were in charge of posting images, as well as breaking stories, during the time that the magazine was in existence in Germany.
Franz Marc was born in Munich, Germany in 1880; he had influence from his father, starting at an early age, as he worked as a landscape painter. At a young age of 20, in 1900, he began his studies at the Academy of Fine Arts, which was located in Munich, and was taught by several influential teachers at the time.