how were egon schiele and oskar kokoschka different from klimt 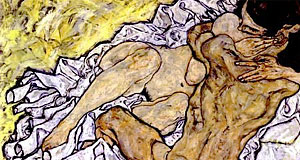 Of the three artists Gustav Klimt, Egon Schiele and Oskar Kokoschka, the latter one seems very overrated to me. Nevertheless, he was at least the most durable one in terms of longevity. Oskar Kokoschka was born in the town of Pöchlarn in 1886. Like Klimt, he studied at the Kunstgewebeschule in Vienna. From 1907, he worked as a designer for the Wiener Werstätte (Vienna Workshop) and from 1910, he co-edited the art magazine “Sturm” in Berlin.
Together with his two friends Anton Faistauer and Franz Wiegele, Klimt founded an artist′s association called “Neukunstgruppe” in 1909. They had one well-regarded exhibition that very year, but remained in rather loose contact afterwards. In 1912, Schiele moved to Neulengbach in the Vienna Woods, where he started to work very productively until he was arrested for child abuse – some local children had entered his workshop and seen very graphic pictures of naked women. 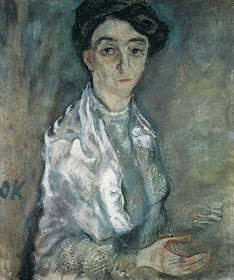 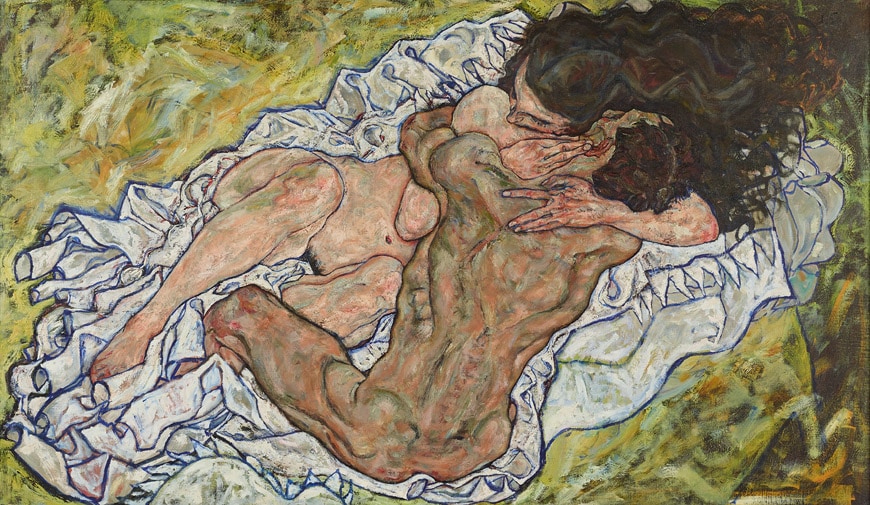 Egon Schiele, The Embrace (Lovers II), 1917
Oil on canvas,100 x 170 cm
© Belvedere, Vienna
The exhibition is divided into four thematic and chronological sections.
Portraiture illustrates the different approaches by the three painter to female portraits, with the sumptuous, almost byzantine, figures by Klimt counterposed to the corporeal, somehow troubled, depictions by Schiele and Kokoschka. Mothers and children shows an almost specular situation, with Klimt’s and Schiele’s nude and “sensual” mothers on one side and the the allegoric references to the Virgin Mary by Kokoschka on the other.
Couples focuses on how the three depicted lovers, in a more symbolic way Klimt, while in a sexually- oriented and emotional way Schiele and Kokoschka, thus clearly showing their Expressionist vision of the matter.
Finally, in the section dedicated to The Nude, the visions by all the three, although different, share the same disquietude about female identity; while, at the same time, they all acknowledge, perhaps unintentionally, the sexual freedom of the New Woman. 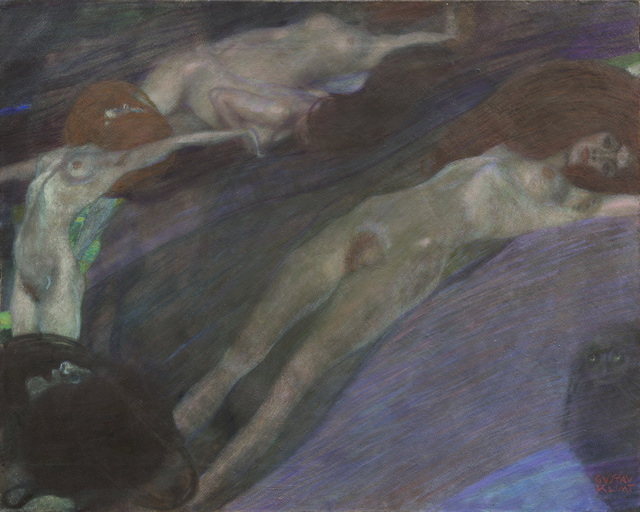 Many of the works in THE WOMAN QUESTION were part of a major exhibition at Vienna’s Belvedere Museum, curated by Jane Kallir, co-director of Galerie St. Etienne. That exhibition, which had a four-month run ending February 28, 2016, was one of the most popular shows in the Belvedere’s history.
THE WOMAN QUESTION: Klimt, Schiele and Kokoschka explores three Austrian masters of Modernism and their shared fixation on the female body. The artists’ work reflects turn-of-the-century Vienna’s preoccupation with gender relations, which at the time were undergoing a radical transformation. More than 60 paintings, watercolors and drawings reveal how the three artists probed and defined modern sexual identity.

With exceptional works on loan from Kunsthaus Zug, Stiftung Sammlung Kamm, and numerous Austrian museums (Arnold Schönberg Center, Albertina, Belvedere, Leopold Museum, mumok, Wien Museum), along with German, Spanish and Swiss institutions, and prestigious private collections.
À fleur de peau. Vienne 1900 (Under the Skin. Vienna 1900) adopts a novel approach to this capital period. Offering to go beyond the classic contrasts – Gustav Klimt’s generation versus Egon Schiele and Oskar Kokoschka’s, symbolism versus expressionism in drawing and painting, or floral versus abstract ornamentation in the applied arts – the show traces the emergence of a new sensibility that found expression in artistic practices that focused on the skin. By exploring the mysteries of this sensitive surface, Vienna’s modernists would redefine the connections between humans and the world, everyday objects and their environment, buildings and streets.