Later in 1911, Kandinsky produced Composition V, a much more abstract work. Here, the theme is the Resurrection of the Dead. The iconography is much more difficult to discern. Comparison must be made to more representational works that treat this theme done by Kandinsky around the same time. Reference to these more literal depictions of the motifs allow us to perceive their abstracted forms within Composition V. Several angels blowing their trumpets are included in the upper portion of the canvas. The strong black line crossing from right to left can be felt as a representation of the blowing of the trumpets. Above this line, the towers of a walled-in city are visible. Below the line, the thin application of paint produces a luminescence that affects our perception of space in that portion of the canvas. The luminescence conveys a sense of infinity through the lack of volume and the absence of perspectival illusion. Out of this void, the viewer can sense the rising of the dead.

Kandinsky was born in Moscow, the son of Lidia Ticheeva and Vasily Silvestrovich Kandinsky, a tea merchant. [5] [6] One of his great grandmothers was a Princess Gantimurova, probably explaining the “slight Mongolian trait in his features”. [7] Kandinsky learned from a variety of sources while in Moscow. He studied many fields while in school, including law and economics. Later in life, he would recall being fascinated and stimulated by colour as a child. His fascination with colour symbolism and psychology continued as he grew. In 1889, he was part of an ethnographic research group which travelled to the Vologda region north of Moscow. In Looks on the Past, he relates that the houses and churches were decorated with such shimmering colours that upon entering them, he felt that he was moving into a painting. This experience, and his study of the region’s folk art (particularly the use of bright colours on a dark background), was reflected in much of his early work. A few years later he first likened painting to composing music in the manner for which he would become noted, writing, “Colour is the keyboard, the eyes are the hammers, the soul is the piano with many strings. The artist is the hand which plays, touching one key or another, to cause vibrations in the soul”. [8] Kandinsky was also the uncle of Russian-French philosopher Alexandre Kojève (1902-1968).
Perhaps the most important of his paintings from the first decade of the 1900s was The Blue Rider (1903), which shows a small cloaked figure on a speeding horse rushing through a rocky meadow. The rider’s cloak is medium blue, which casts a darker-blue shadow. In the foreground are more amorphous blue shadows, the counterparts of the fall trees in the background. The blue rider in the painting is prominent (but not clearly defined), and the horse has an unnatural gait (which Kandinsky must have known). Some art historians believe [ citation needed ] that a second figure (perhaps a child) is being held by the rider, although this may be another shadow from the solitary rider. This intentional disjunction, allowing viewers to participate in the creation of the artwork, became an increasingly conscious technique used by Kandinsky in subsequent years; it culminated in the abstract works of the 1911–1914 period. In The Blue Rider, Kandinsky shows the rider more as a series of colours than in specific detail. This painting is not exceptional in that regard when compared with contemporary painters, but it shows the direction Kandinsky would take only a few years later. Hidden within the bright swaths of color and the clear black lines of Composition IV, Kandinsky portrayed several Cossacks with lances, as well as boats, reclining figures, and a castle on a hilltop. As with many paintings from this period, he represented the apocalyptic battle that would lead to eternal peace. The notion of battle is conveyed by the Cossacks, while the calm of the flowing forms and reclining figures on the right alludes to the peace and redemption to follow. In order to facilitate his development of a non-objective style of painting, as described in his text Concerning the Spiritual in Art (1912), Kandinsky reduced objects to pictographic symbols. Through his elimination of most references to the outside world, Kandinsky expressed his vision in a more universal manner, distilling the spiritual essence of the subject through these forms into a visual vocabulary. Many of these symbolic figures were repeated and refined in later works, becoming further and further abstracted as Kandinsky developed his mature, purely abstract style.
Influenced by the flowing biomorphic forms of Surrealism, Kandinsky later incorporated organic shapes back into his pictorial vocabulary. Executed in France, this monumental painting relies upon a black background to heighten the visual impact of the brightly colored undulating forms in the foreground. The presence of the black expanse is significant, as Kandinsky only used the color sparingly; it is evocative of the cosmos as well as the darkness at the end of life. The undulating planes of color call to mind microscopic organisms, but also express the inner emotional and spiritual feelings Kandinsky experienced near the end of his life. The uplifting organization of forms in contrast with the harsh edges and black background illustrates the harmony and tension present throughout the universe, as well as the rise and fall of the cycle of life. Last in his lifelong series of Compositions, this work is the culmination of Kandinsky’s investigation into the purity of form and expression through nonrepresentational painting. 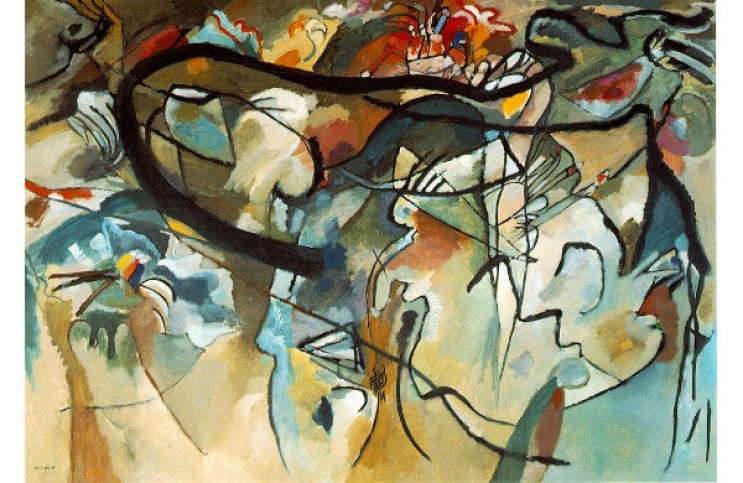 “Composition VII” (1913) by Wassily Kandinsky is considered by many abstract art aficionados to be the most important painting of the 20th Century—perhaps even the most important abstract painting ever created. Yet frequently when someone looks at it for the first time they react negatively, expressing anger, frustration, or even disgust. Undeniably, it is a difficult painting, especially for those who are new to abstract art. First of all, it is massive, measuring 200 x 300 centimeters. Secondly, the surface is entirely covered with countless overlapping amorphous forms, seemingly random lines, and a minefield of colors, some vivid and some blurred. Nothing references the known natural world. Only the illusion of depth is perceptible, but the space into which it recedes bears no semblance to reality. The painting could easily look like nonsense to anyone unwilling to work towards unravelling its mysteries. But for those willing to study it with an open mind, “Composition VII” can pay enough intellectual, visual, and even spiritual dividends to last a lifetime. And I am not being hyperbolic. This painting truly is that important to some people—not only because of its visual, physical, or formal qualities either, but because for Kandinsky and those who appreciate him, “Composition VII” has come to be understood as a concrete embodiment of spiritual purity in art.
Wassily Kandinski – Composition VII, 1913. Oil on canvas. 79 x 119 in (200.6 x 302.2 cm). Tretyakov Gallery

Circles would be used by Wassily to represent planetary symbolism, and this became common during the abstract period of the famous artist’s career.
The painting, eighth in an instalment dating back to 1911 when Kandinsky co-founded The Blue Rider group in Munich, was the first of his compositions to be painted since the outbreak of the First World War. A composition, as opposed to an improvisation, referred to a painting that was executed in adherence to a specific plan rather than created in the spur-of-the-moment and driven by impulse. The difference between a composed and an improvised painting may have been, in the artist’s perception, the same as that which existed between classical music and free-jazz. Kandinsky, having spent several years prior to World War One in Germany before returning to Russia at the outbreak of World War One, was able to re-connect with the avant-garde current in Germany and to begin composing again. Composition VIII, drawing on influences of the previous nine years, is an expression of Kandinsky’s internalised vision in the abstract form.