The sculpture is recognisable as a human form. The head has a notch, like a claw; the narrow torso has two dangling breasts; the left arm rests on the ground, while the right arm and ribbon-like backbone are linked to a pelvis resting on the ground, from which to one long bone-like limb extends to one side.
A 5.75 by 13 inches (14.6 cm × 33.0 cm) lead maquette was made by Moore in 1938, and sold by him to the Museum of Modern Art in New York in 1939. An edition of nine bronzes was cast in 1946; one example is held by the Peggy Guggenheim Collection in Venice, and another in the Leeds Art Gallery since 1991.

It was made from three blocks of Green Hornton, a Jurassic limestone from a quarry near Banbury in Oxfordshire. It was carved by hand, over a period of about 5 weeks, with Moore working outdoors at his cottage, Burcroft, in Kingston, Kent, assisted by Bernard Meadows. One block forms the head, which is abstracted to a bud, with shallow depressions for eyes and slight ridges for a nose and brows. The two other blocks were used for the body and legs. The figure has noticeable shoulders and arms, with pendant breasts hanging over a space where the torso should be, linked to an abdomen and legs. It measures 88.9 by 132.7 by 73.7 centimetres (35.0 in × 52.2 in × 29.0 in) and weighs 520 kilograms (1,150 lb).
The work is a development of Moore’s earlier stone sculptures Reclining Figure 1929 (LH 59), which was made in Brown Hornton limestone, and his Reclining Woman (Mountains) 1930 (LH 84); and his elmwood sculpture Reclining Figure 1935–6. It is less blocky and more rounded than the earlier works, and pierced with holes. 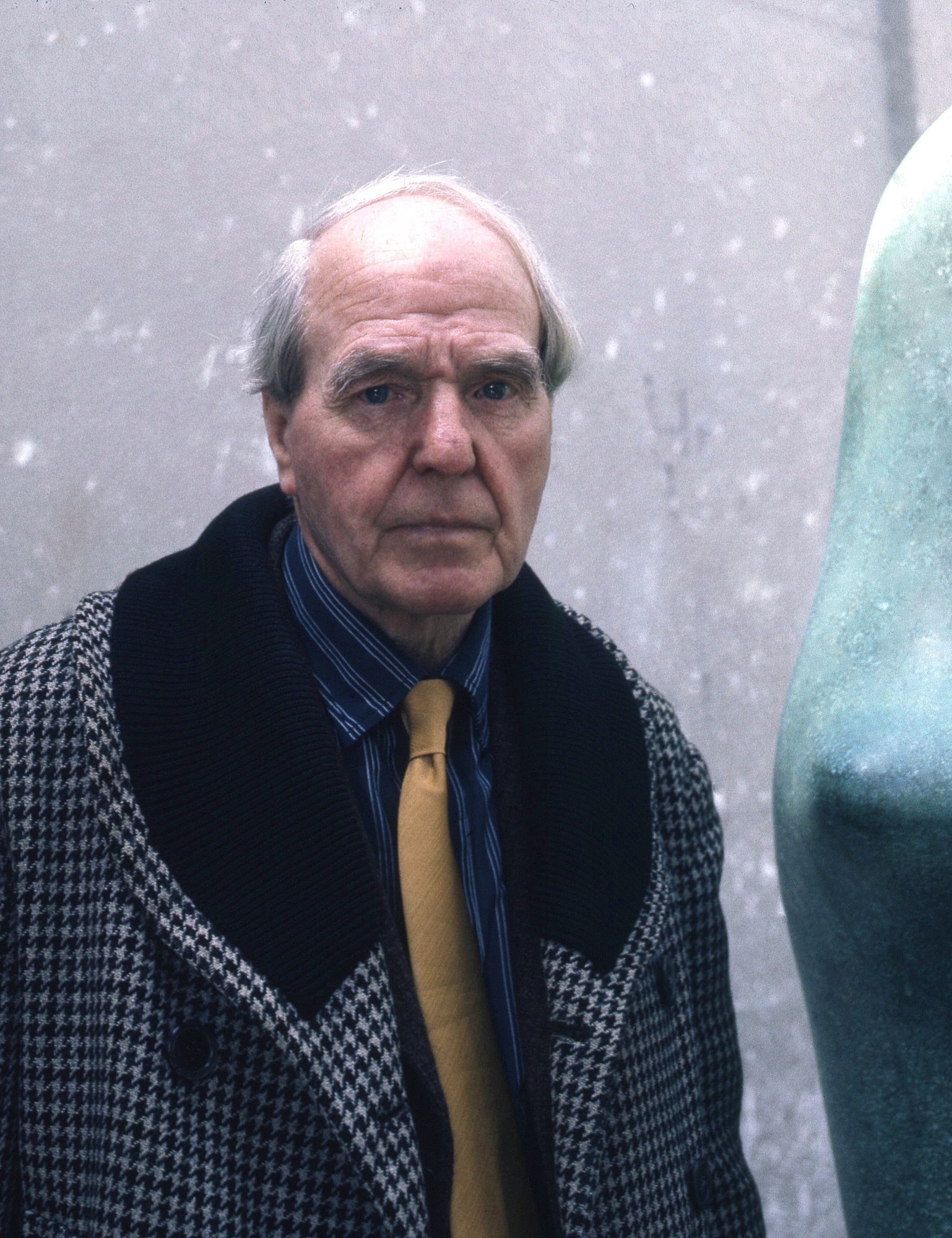 © The Henry Moore Foundation; All rights reserved DACS 2014
Look at the sculpture shown above. It is another reclining figure, but the separate pieces that make up the sculpture do not look like parts of the human body. The bent knees look like a craggy cliff and the body looks a bit like a cave in a hillside. Even the head could be a tree on top of a round hill. But arranged together, they look like a figure lying down. In this way Henry Moore found a way of linking the human body with the landscape.

So “The Shape of Anxiety” should to some degree revitalize the city’s connection with Moore, “integral to the cultural fabric of our city,” in Teitelbaum’s words. The three-month exhibition, which originated with Tate Britain, might likewise change the way visitors view the AGO’s own Moore collection — now some 900 pieces, the largest accumulation of Moore on the planet — which are in limited numbers expertly interspersed among the 53 imported pieces, some 37 never shown here before.
The rough symmetry of Parke-Taylor’s central arrangement is mirrored by a periphery of reclining figures, with the Working Model For Reclining Figure Lincoln Center (1963-1965) at the far east end of the room and Working Model for UNESCO Reclining Figure (1957) at the far west end.