In 1910 Hopper returned to the United States, never to leave North America again. During the 1910s, Edward Hopper struggled quite a bit to gain any recognition for the works he had created. During this period a number of his works were distributed through various shows and exhibits in New York, but very little, if any attention, was given to his pieces. Oil painting was a focal point of the work he had done, but a majority of the sales he made during this period, was for works he had created doing etching work and murals.

Great art is the outward expression of an inner life of the artist, and this innerlife will result in his personal vision of the world.” – Edward Hopper

Hopper was initially trained as an illustrator, but, between 1901 and 1906, he studied painting under Robert Henri, a member of a group of painters called the Ashcan School. Hopper travelled to Europe three times between 1906 and 1910, but he remained untouched by the experimental work then blossoming in France and continued throughout his career to follow his own artistic course. Although he exhibited paintings in the Armory Show of 1913, he devoted most of his time to advertising art and illustrative etchings until 1924. He then began to do such watercolours as Model Reading (1925), as well as oil paintings. Like the painters of the Ashcan School, Hopper painted the commonplaces of urban life. But, unlike their loosely organized, vivacious paintings, his House by the Railroad (1925) and Room in Brooklyn (1932) show still, anonymous figures and stern geometric forms within snapshot-like compositions that create an inescapable sense of loneliness. This isolation of his subjects was heightened by Hopper’s characteristic use of light to insulate persons and objects in space, whether in the harsh morning light ( Early Sunday Morning, 1930) or the eerie light of an all-night coffee stand ( Nighthawks, 1942).
Edward Hopper, (born July 22, 1882, Nyack, N.Y., U.S.—died May 15, 1967, New York City), American painter whose realistic depictions of everyday urban scenes shock the viewer into recognition of the strangeness of familiar surroundings. He strongly influenced the Pop art and New Realist painters of the 1960s and 1970s.

(Later information from Josephine’s diaries presented by art scholar Gail Levin in the 1995 book Edward Hopper: An Intimate Biography presented the marriage as becoming highly dysfunctional and marked by abuse from Hopper, though another couple who knew the two challenged such claims.)
Back in the United States, Hopper returned to his illustration career but also began to exhibit his own art as well. He was part of the Exhibition of Independent Artists in 1910 and the international Armory Show of 1913, during which he sold his first painting, Sailing (1911), displayed alongside works by Paul Gaugin, Henri de Toulouse-Lautrec, Paul Cézanne, Edgar Degas and many others. That same year, Hopper moved to an apartment on Washington Square in New York City’s Greenwich Village, where he would live and work for most of his life.

Robert Henri has gone down in art history as a co-founder of The Eight, a group of artists who in spring 1908, prevented from exhibiting in the prestigious National Academy of Design, mounted their own show at the Macbeth Gallery, New York. Henri set European masters on a par with the American artists he admired, even giving them priority, and that not only in chronological terms. In the late 1880s and the middle of the 1890s, Henri had studied in Paris for extended periods, responding to the call of France like many American artists of the day, before returning home with a renewed consciousness of their American roots. To his students, Henri extolled the old and modern masters who meant so much to him: Rembrandt, Diego Velazquez, Vermeer, Manet, Degas, Daumier – an odd mixture, but indicative of the eye of a born realist who was interested above all in the representation of the human figure.
The key accomplishment of the early period was an assimilation of Impressionism. Hopper’s palette grew lighter, his brushwork freer, and his observation more precise. His approach to motifs began to show a growing independence from any model or ideal, both in the American subjects and the Paris ones. Under the Impressionist spell, Hopper discovered the unique light of Paris: “The light was different from anything I had known,” he later recalled. “The shadows were luminous, more reflected light. Even under the bridges there was a certain luminosity.” In 1924, Hopper married Jo. From that time on she became his primary model and most ardent supporter. In that same year he had a solo exhibition of watercolors at the Frank K. M. Rehn Gallery in New York. The show sold out and the Rehn Gallery continued to represent him for the rest of his life. This success enabled Hopper to finally give up illustrating.
Hopper’s open-ended narratives have also appealed to writers and musicians. Tom Waits titled an album Nighthawks at the Diner and Madonna named a concert tour after the painting Girlie Show (1941). Joyce Carol Oates refers directly to Hopper in her poem, Edward Hopper’s Nighthawks 1942. Many others have created whole collections of stories or poems using Hopper paintings as starting points. Hopper’s Nighthawks has been appropriated and used hundreds of times in all forms of media within popular culture. An image of the painting or a facsimile of it can be found in an episode of the Simpsons, as the backdrop for a Peeps marshmallows ad, or featuring Marilyn Monroe and James Dean (in Gottfried Helnwein’s Boulevard of Broken Dreams (1984)), morphed into a Starbucks, a space station, and in a variety of cartoons in The New Yorker. 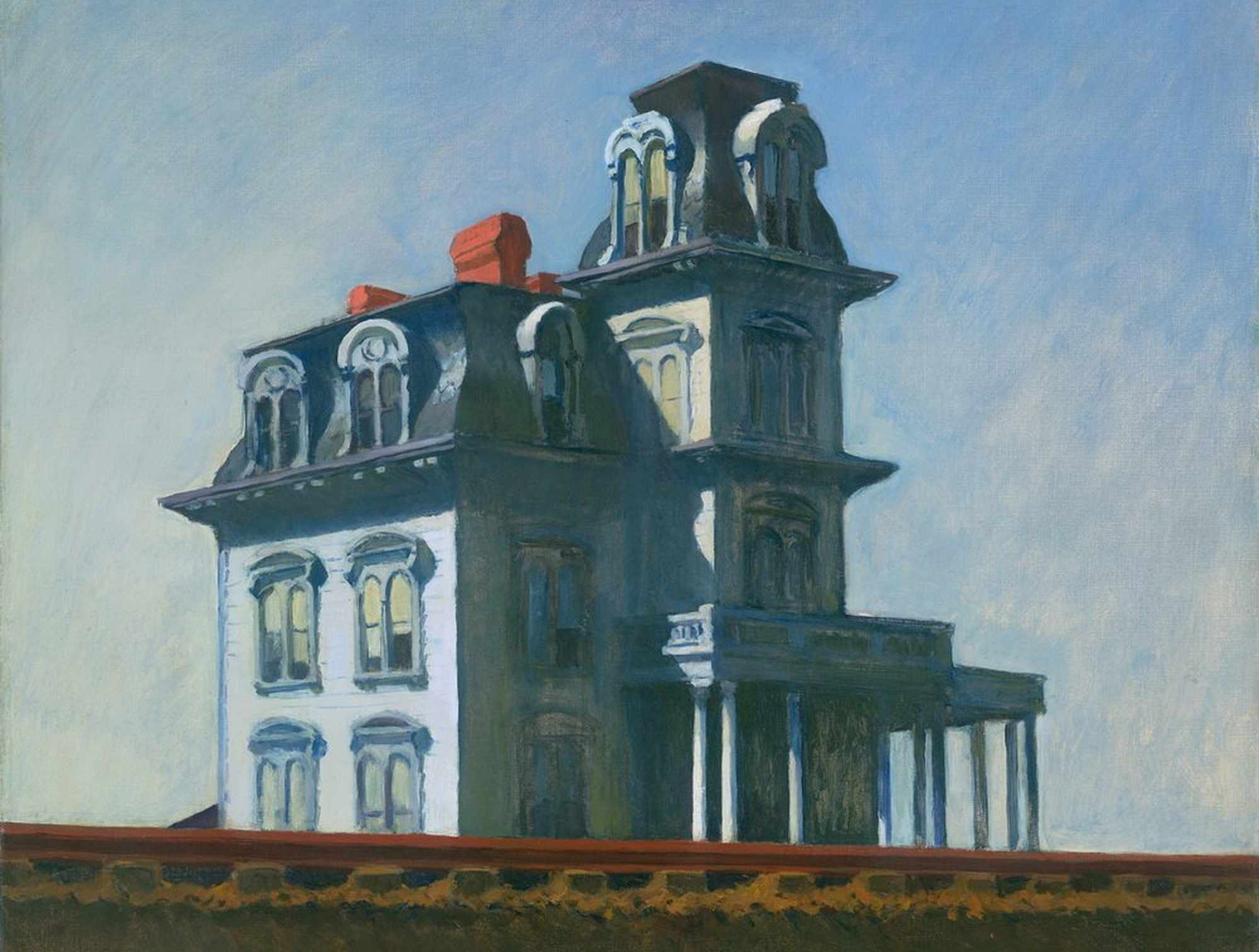 Early works like House with People (ca. 1906-09), The El Station (1908), The Louvre in a Thunderstorm (1909), and Summer Interior (shown above) reflect Hopper’s training in urban realism. Relaxed brushstrokes depict disturbing moments without judgment or sentimentality.
Edward Hopper’s parents advised him to learn a practical trade. After he graduated from the Nyack public high school in 1899, he took a course in illustration and then enrolled at the New York School of Art, now known as Parson’s The New School for Design. There, he could study commercial art as his parents wanted while simultaneously developing his skills as a painter. 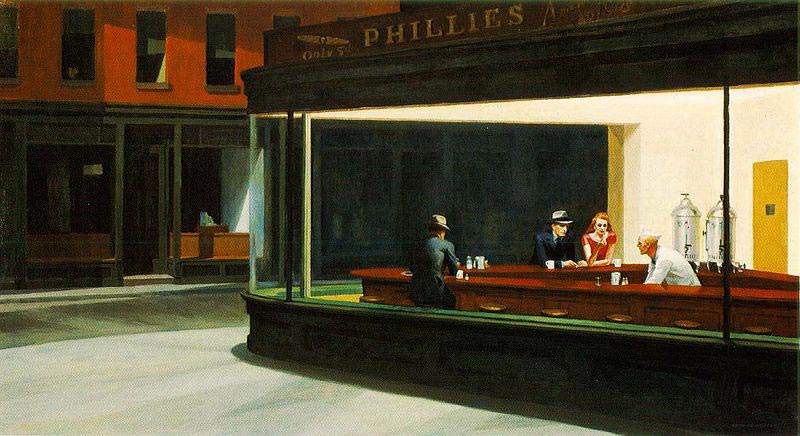 Hopper continued to struggle with his artistic vision and personal life, returning to New York and reluctantly taking up commercial illustrations again for a living. After an influential trip to Massachusetts, Hopper came up with among his first nautical-inspired realist suburban scenery, and was able to sell his first painting, Sailing (1911). Hopper moved to Greenwich Village in New York and worked on more commissioned illustrations such as movie posters.
While Hopper would be most known for his oil paintings for the entirety of his artistic career, Hopper also produced some etchings during this period, mostly of Parisian and New York urban scenes. He also explored more of the watercolor medium with his trips to artistic communities and niches in New England, portraying natural scenery and nautical themes.