The mural paintings that decorated the house known as “la Quinta del Sordo,” where Goya lived have come to be known as the Black Paintings, because he used so many dark pigments and blacks in them, and also because of their somber subject matter. The private and intimate character of that house allowed the artist to express himself with great liberty. He painted directly on the walls in what must have been mixed technique, as chemical analysis reveals the use of oils in these works.
The Baron Émile d’Erlanger acquired “la Quinta” in 1873 and had the paintings transferred to canvas. The works suffered enormously in the process, losing a large amount of paint. Finally, the Baron donated these paintings to the State, and they were sent to the Prado Museum, where they have been on view since 1889.

The Dog is one of a series of paintings Goya painted on the walls of his home. They were later named his Black Paintings because of their dark and ambiguous nature. At the same time the ailing and elderly Goya, upset over the ongoing civil wars in Spain, was finishing his Disasters of War series. The Black Paintings are thought to be intensely personal works that were never meant for public display.
In the foreground, a long slope of dark ochre begins at the left side of the canvas and increases in size as it flows to the right. Slightly left of center, a dark gray dog”s head with ears flopped back, nose facing to the right, looks up the slope. The background is a lighter wash of paler ochre. A dark splotch in the upper right corner is usually considered to be damage or an artifact from an earlier painting that was painted over while the work was still on its original plaster wall. 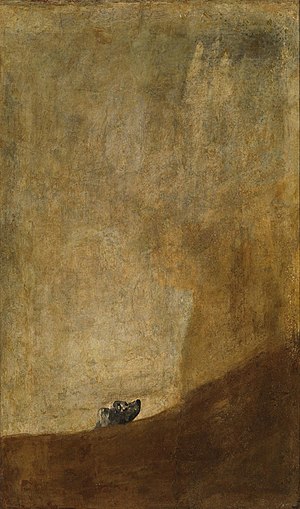 The enigmatic depiction of the dog has led to myriad interpretations of Goya’s intentions. The painting is often seen a symbolic depiction of man’s futile struggle against malevolent forces; [2] the black sloping mass which envelopes the dog is imagined to be quicksand, earth or some other material in which the dog has become buried. Having struggled unsuccessfully to free itself, it can now do nothing but look skywards hoping for a divine intervention that will never come. [3] The vast swath of “sky” which makes up the bulk of the picture intensifies the feeling of the dog’s isolation and the hopelessness of its situation. Others see the dog as cautiously raising its head above the black mass, afraid of something outside the painting’s field of view, or perhaps an image of abandonment, loneliness, and neglect. Robert Hughes says “We do not know what it means, but its pathos moves us on a level below narrative.” [4]
Although Goya did not intend the Black paintings to be seen by the public, they are today seen as among his most important works. When Goya went into self-imposed exile in France in 1823, he passed the Quinta del Sordo to his grandson, Mariano. After various changes of ownership, the house came into the possession of the French banker Baron Emile d’Erlanger in 1874. After 70 years on the walls of the Quinta del Sordo, the murals were deteriorating badly and, in order to preserve them, the new owner of the house had them transferred to canvas under the direction of Salvador Martínez Cubells, the curator of the Museo del Prado. [5]

From the year 1775 to 1792, Goya worked on cartoon paintings for the royal tapestry workshop in Madrid. It marked his most important period in art where he did his first genre pictures. The experience helped him study human behaviour. Goya was also influenced by neoclassicism, which was quickly gaining popularity over the grand rococo style. His study of Velazquez works in the royal assortment spawned a freestyle and more spontaneous painting style.
His early work like the tapestry scenes of everyday fun (for the Spanish Court) and the portraits going to a show at the National Gallery in London show a bright and sociable Francisco Goya.

In 1819, Goya moved to a property in the outskirts of Madrid -later known as the вЂњQuinta del Sordo (Deaf Man’s House)”- where he painted his famous Black Paintings, a group of fourteen or fifteen heartrending paintings, such as “Witches’ Sabbath” or the (in)famous вЂњSaturn devouring one of his sonsвЂќ.
1820-22
Fresco transferred to canvas, 134 x 80 cm. -Madrid, Prado Museum 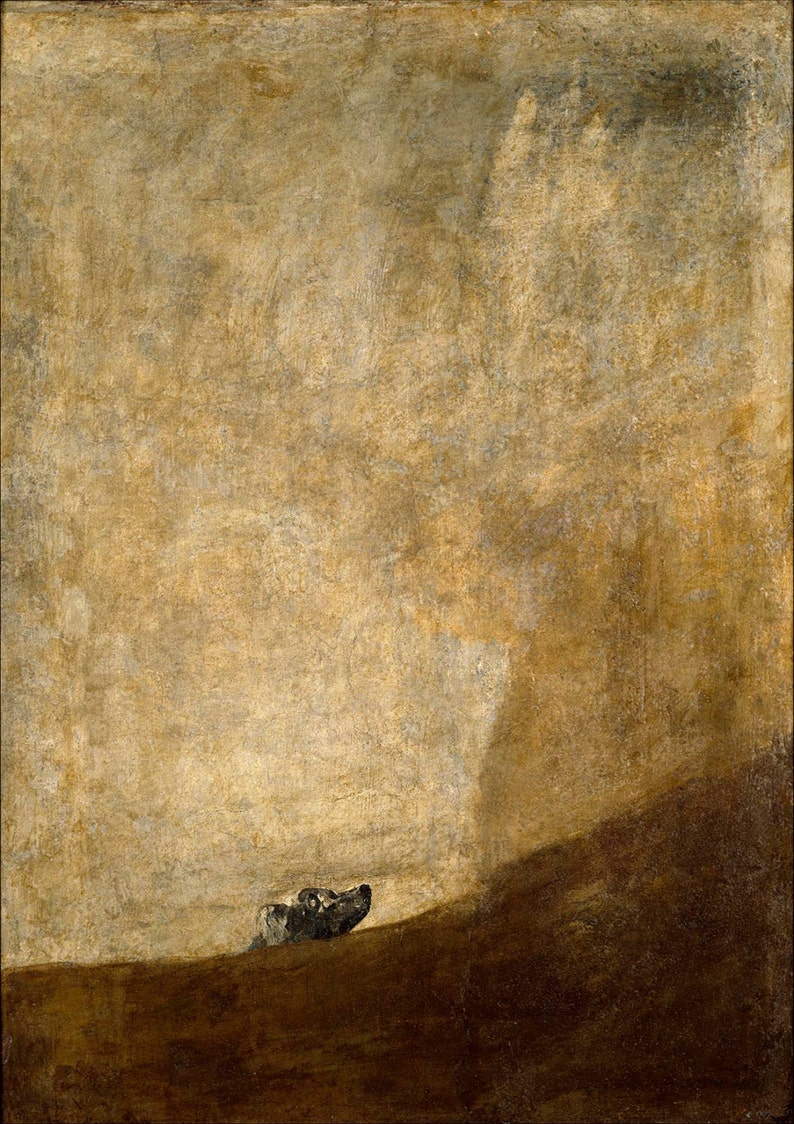