Robert Hughes, “Shock of the New”:
“The target is a test, and Johns took it with a sort of deadpan irony to test what one expects a work of art to do. For a painted target automatically negates the use of a real one. Once a target is seen aesthetically, as a unified design, its use is lost. It stops being a sign and becomes an image. We do not know it so clearly. Its obviousness becomes, in some degree, speculative. The center is not more important than the rings. In “Target with Plaster Casts”, the target’s five rings present themselves as painting alone: an even edible skin of wax encaustic, no part of it visually “superior” to the rest. Despite its target format, the painting is actually in the tradition of visual “all-overness” a continuous matrix of marks that ran from Seurat to Jackson Pollock. The idea of putting a bullet through it seems absurb. What would one aim at? A sign which can only be stared at becomes a painterly image which must be scan
ed. Meanwhile, the plaster casts of bits of the human body, set in their boxes above the painting, are transformed in exactly the opposite way. Their anonymity as specimens, twice removed from life – first cast, then dipped in monochrome paint – makes them like fossils or even more, like words, signs that stand for classes of things. “Ear”, “hand”, “penis”: one would like to see them as elements of a portrait, but they ca

And so, in Target With Plaster Casts, two systems of seeing are locked in perfect mutual opposition, the sign becoming a painting and sculpture becoming a sign.
In 1958, gallery owner Leo Castelli visited Rauschenberg’s studio and saw Johns’ work for the first time. Castelli was so impressed with the 28-year-old painter’s ability and inventiveness that he offered him a show on the spot. At that first exhibition, the Museum of Modern Art purchased three pieces, making it clear that Johns was to become a major force in the art world. 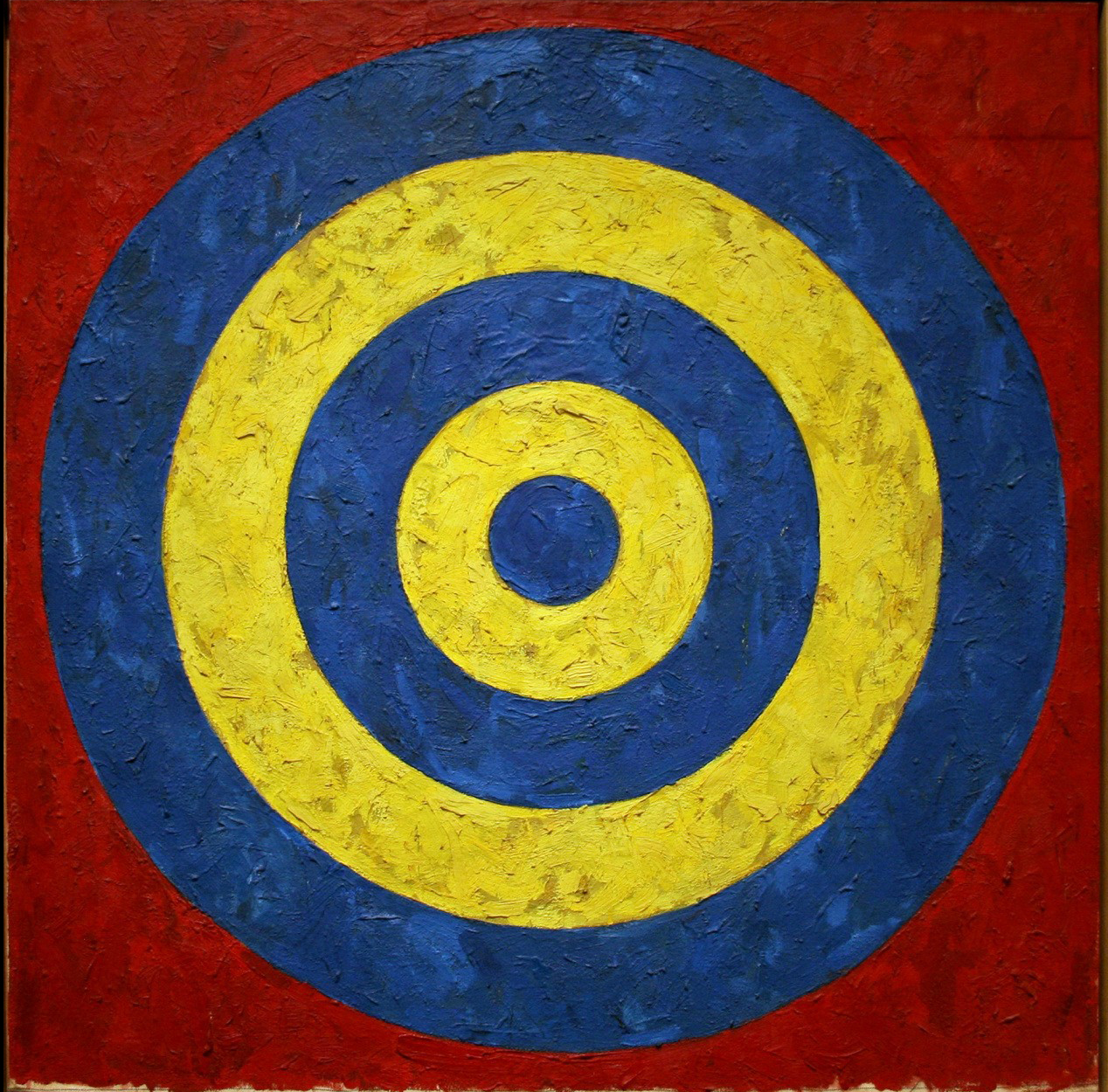 Johns, who was born today, 15 May, in 1930, was an early pop-art pioneer, and understood how signs used in everyday visual communication could be combined effectively with more painterly techniques.
“Among these works, a lithograph from 1960 – at once target and eyeball – serves to drive home the essential ambiguity of the motif as it pertains to the idea of sight. A bull’s eye generally serves as a means of attracting and focusing the eye; thus, it is an apt, if provocative motif for a work of art, since most paintings and sculptures are also inert objects made for the purpose of being seen. Johns’ targets, which use the bull’s-eye motif to heighten the act of beholding, also seem to look back at the beholder, as if to challenge the basic assumption that one can view art without being seen in return.

Each of these Target paintings by Johns features a depiction of an actual target that is, for all practical purposes, utterly interchangeable with the real thing. Yet unlike the flag or the number, which are also familiar images from this period of the artist’s career, the flat target is simultaneously representational and abstract (a number or a flag can never be divorced from its status as a familiar sign). This makes the target susceptible to other ambiguities. Targets imply, or are instruments of, seeing across space (and seeing as an act of potential violence). But the optical nature of the concentric bands can also be understood to figure distraction rather than focus,
His art is built on such ambiguities. Most of his very early paintings, done in a thick encaustic medium that makes them look molded instead of brushed, feel like sculptures. Many of those done a bit later in oils have three-dimensional objects attached to their surfaces so that, like furniture, they carve out sculptural space.