Fun fact: The Runaway was staged in a Howard Johnson’s restaurant in Pittsfield, Massachusetts. Rockwell later removed all traces of the chain restaurant in favor of a simple blackboard listing the daily specials often found in country diners “to suggest the kid had gotten a little further out of town.”
The only prop that suggests a disturbance is the wannabe hobo’s stick and handkerchief.

To underscore the lad’s meager possessions, Rockwell placed a handkerchief on a stick beneath the stool. For about an hour, Clemens and Locke sat as still as they could while the maestro adjusted their postures (“Keep one arm extended”) and expressions (“Look this way and that”). “I was a little kid, but he made it easy on me,” says Locke, 59, a landscaper and maintenance worker in Great Barrington, Massachusetts. Clarence Barrett, a friend of Rockwell’s who worked at a local garage, manned the counter.
“I was told to be in my uniform at the Howard Johnson’s [restaurant] in Pittsfield,” recalls Clemens, now 81 and retired in Clifton Park, New York. Inside, he was introduced to 8-year-old Eddie Locke, whose father and brother Clemens already knew. Rockwell had recruited the boy from the local elementary school to play a plucky young vagabond. 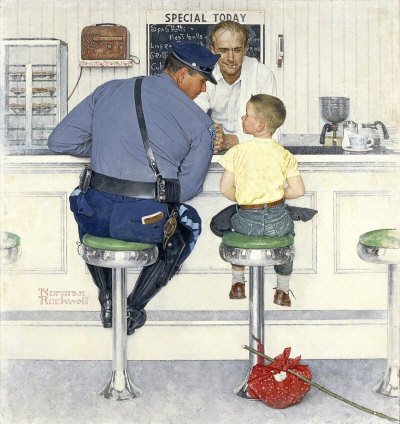 This is also the fourth for The Post in 1958. In 1958, there were five Norman Rockwell Saturday Evening Post covers published. This was also the 302nd of 322 Rockwell paintings published on the cover of the Post.
Do you have a personal story about this painting? Do you know the model personally? Do you have a different take on the commentary? 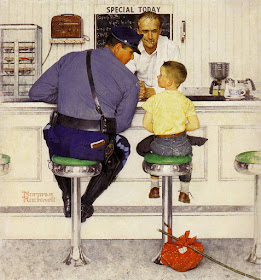 The guy behind the counter is obviously a seedy character. Consider the greasy hair, cigarette hanging out of the corner of his mouth. He looks like he’s been up all night.
Why a cop, and not a businessman? Because only the cop (law and order) makes routine contact with the world’s seedy underbelly and remains uncorrupted. These are the two people best suited to tell the kid what his future holds if he continues with his choice to run away. The counter guy’s cocky too-familiar smile betrays he’s not giving the kid a straight story. And his raised eyebrow means he’s sizing the kid up, taking him in.

The Norman Rockwell Museum donated two framed prints of the painting to the state police and Clemens and Locke were invited to autograph them.
“The painting of a trooper bending over in counsel to a young boy intent on leaving home captures – much more than any of the images of shoot-outs and car chases favored by popular culture — the highest ideal of police work: helping someone in need at a vulnerable moment,” she said.