As subject Raphael chose a verse from a poem by the Florentine Angelo Poliziano which had also helped to inspire Botticelli’s ‘Birth of Venus’. These lines describe how the clumsy giant Polyphemus sings a love song to the fair sea-nymph Galatea and how she rides across the waves in a chariot drawn by two dolphins, laughing at his uncouth song, while the gay company of other sea-gods and nymphs is milling round her.
To start with the small boys with Cupid’s bows and arrows who aim at the heart of the nymph: not only do those to right and left echo each other’s movements, but the boy swimming beside the chariot corresponds to the one flying at the top of the picture. It is the same with the group of sea-gods which seems to be ‘wheeling’ round the nymph. There are two on the margins, who blow on their sea-shells, and two pairs in front and behind, who are making love to each other. But what is more admirable is that all these diverse movements are somehow reflected and taken up in the figure of Galatea herself. Her chariot had been driving from left to right with her veil blowing backwards, but, hearing the strange love song, she turns round and smiles, and all the lines in the picture, from the love-gods’ arrows to the reins she holds, converge on her beautiful face in the very centre of the picture.

As subject Raphael chose a verse from a poem by the Florentine Angelo Poliziano which had also helped to inspire Botticelli’s Birth of Venus. These lines describe how the clumsy giant Polyphemus sings a love song to the fair sea-nymph Galatea and how she rides across the waves in a chariot drawn by two dolphins, laughing at his uncouth song, while the gay company of other sea-gods and nymphs is milling round her.
The Sienese banker and art patron Agostino Chigi, whose great wealth made him one of the most powerful men of his age, built his Roman villa in the Trastevere district. Its construction and decoration were conducted by the Sienese painter and architect Baldassare Peruzzi, who, in turn, brought in other painters, including Sodoma and Sebastiano del Piombo, to execute parts of the fresco decorations. The ground-floor grand salon of the house has an ingenious and highly intricate ceiling fresco that treats Chigi’s horoscope; the stars were painted in the guise of personifications arranged in the sky at the moment of his birth. On the walls were planned a series of frescoes dealing with the gods of the earth and of the sea. Only two were ever executed: Sebastiano’s Polyphemus and Raphael’s Galatea. In contrast to its counterpart next to it, Raphael’s fresco offers continual turmoil and swift movement, as the graceful Galatea streaks across the sea in a shell propelled by dolphins.

вЂњTwo shapely dolphins pull a chariot: on it sits Galatea and wields the reins; as they swim, they breathe in unison; a mere wanton flock circles one spews forth salt waves, others swim in circles, one seems to cavort and play in love; with her faithful sisters, the fair nymph charmingly laughs at such a crude singer.вЂќ
The story of Galatea and Acis proved inspirational for other mediums of art, particularly opera. Jean-Baptiste Lully based his 1686 opera Acis et GalatГ©e a on the love triangle between Galatea, Acis and Polyphemus . This was followed by Giovanni BononciniвЂ™s one-act opera Polifemo in 1703. However, the most well-known opera depicting the tale is undoubtedly the version by George Frideric Handel, Acis and Galatea. Although earlier versions of the pastoral opera focused on Polyphemus as an equally important character, in the final version, the story is more solely focused on the two lovers. Critics argue that HandelвЂ™s version is the greatest pastoral opera ever composed. 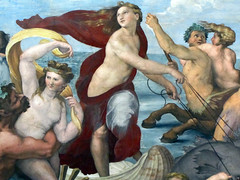 Raphael’s Triumph of Galatea is based on Greek mythology. Galatea was part of a love triangle of sorts. She had fallen in love with a shepherd by the name of Acis. This made Polyphemus jealous and he used a huge pillar to kill his rival. This fresco is part of a series but the entire series was never finished.
Raphael picked the snapshot of Galatea’s apotheosis, that is, her change upon death into one who might abide among the everlasting divine beings. This would be as a reward for her patient endurance of pains and trials in life. The Triumph of Galatea was painted by Raphael as his response to how he felt about the “Stanze per la giostra”.