Matthew tells the last moments of Jesus’ passion in most detail.
Caravaggio was a natural genius who presented new visions, colours and compositions in each painting. It is very impossible to typify an artist who evolved so rapidly with each painting and so drastically. After 1600, still his early period, his figures seem to be shaped by the light or to exist only by shafts of light coming from various angles at his scenes. Caravaggio’s figures are thrown at the viewer in a flash of sudden brightness, ready to disappear again in the dark the next moment. In that sudden flash, intense movement is caught. Instead of Mannerism and dignified detachment of subject, Caravaggio thus threw the viewer in the middle of his scenes. A Cupid was so realistically painted as to want to jump out of the canvas; a Jesus suffered so close to us that we could be one of the torturers. This was Baroque pathos, but rendered in a totally realistic and explicit way.

In The Flaggellation Caravaggio followed a well-established format in arranging the figures. The most influential precedent was Sebastiano del Piombo’s Flagellation fresco of 1516 in San Pietro in Montorio in Rome, based on preparatory paintings by Michelangelo. Caravaggio took the fresco as his general model, and as the specific model for the pose of Christ’s head, arms, and torso. Characteristically, however, he eliminated the superfluous spectators, reduced the architecture to the single central stabilizing column, and used an austere palette of warm neutrals and flesh tones. The repoussoir was an addition, but not Caravaggio’s invention. Distantly derived from the ancient Arrotino, the figure had already made an appearance in a number of prints and paintings, most notably, more fully and much more colorfully dressed, in Alessandro del Barbiere’s canvas of 1566 in the church of Santa Croce, Florence. The pose of the upper body and arms of the torturer on the left seem to have been copied exactly from the Santa Croce picture, although Christ and the man on the right, who is tightening His bonds to the column, assume different poses. From all the figures Caravaggio has taken away the lithe grace of their sixteenth-century prototypes, replacing the earlier elegant forms with the heavy brutish muscularity that in sordid reality they would be likely to have. Even Christ has become brawny.
The result of these changes has been to make The Flagellation convincing not merely as an idea of torture but as its sadistic actuality. The event takes place in the murky vastness of a grim dungeon. Menace fills the shadowy mass of dark figures surrounding Christ. The crouching man binding a scourge would, in himself, speak of malevolence, even without the snarling cruelty contorting the swarthy face of his companion on the left and the savagery of their gestures. Christ responds naturally, with involuntary physical reaction, His powerful physique emphasizing His helplessness and sense of degradation. He holds His head down, less in shame than to avoid the blows, and He literally writhes with His feet and body, as if struggling to escape. He is haloed; and the light, striking only Him fully, makes Him radiant, but He is suffering like any other man. 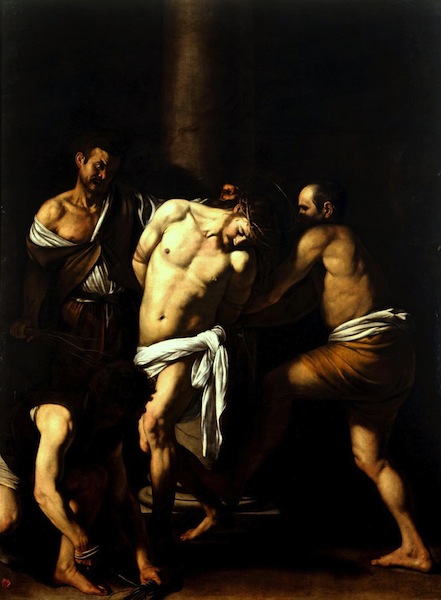 The Flagellation, commissioned by Tommaso De Franchis for a large sum of money, was at that time, intended for the chapel of Zì Andre, located in the first aisle on the left in the San Domenico Maggiore church – Spaccanapoli.
It is no coincidence that one of the most turbulent districts in the town was the Spanish quarter, the Quartieri Spagnoli, a place which daily saw the clash between the Spanish culture (invaders) and the Neapolitans (locals). Speaking in sociological terms, this is where we can catch sight of the torturers of the ‘Flagellation’. With an austere style of monumental structures, the sculptural and plastic image of Christ standing by the column and resting in full light, deeply contrasts the shadow. Inside of it, the beasty and trivial figures of tortures shake their bodies as determined in continuing with anger – like body puppets of a sad carillon – in their tremendous commitment. 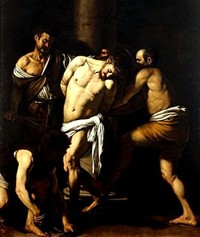 Confusion Over Caravaggio’s Visits to Naples