woman before an aquarium

In the poem, the speaker describes how she “…always wants to be a mermaid.” This line suggests that there is some conflict in the woman’s life from which she wishes she could escape. This is a relational problem as she also states how she has a “fear of the human smell.” This woman wishes she could overcome her fear of man and discover who she is, but at this point all she can do is gaze into the fishbowl and imagine her life as one of the fish. This has to do with “the trapper standing over me,” mentioned previously in the poem. This woman obviously feels bound by someone or something and desires to be free. She wishes to be a fish in the fishbowl because, although they certainly are not free, at least they do not realize they are trapped. She also expresses her desire “to be untouchable.” She feels as though she cannot live and act the way she wishes to because of the pressures around her, maybe her family or the strict rules of society. In the painting, the woman is staring intently into the fishbowl, as if she were imagining she was a fish. She looks neither happy nor sad, but instead looks as if she were longing to be in the fishbowl.
The woman imagines herself as a fish, “glinting inside with the flicker of water, heart ticking with the message of biology to a kindred species.” She fantasizes about the peace and joy that results from the simple life inside the fishbowl. She pictures herself as “The mermaid – not the enchantress, but the mermaid of double life.” Describing herself as one of double life may refer to the identity of a mermaid as both woman and fish and possessing the ability to communicate with both species. The mermaid is “thinking as always of swimming.” The woman in the painting longs for the life of a sea creature, one that is carefree and outside of the realm of society where the only think there is to think about is swimming. Most of the painting is dark or neutral colors, while the fish in the fishbowl are orange. This contrast demonstrates the two different worlds present in the woman’s mind: the world in which she wished she lived and the world in which she lives.

The way she describes this woman shows her sympathy. She seems to be well into her thoughts, wishing she would get into the water and avoid the human smells she has to endure on a daily bases. She says that the woman is “dressed, a simple western face, a schoolgirl’s haircut, the plain desk of ordinary work…” (Line 26-8). She seems to be desperate for something else instead of being seated in a place where her worth is not recognized. She is an odalisque yet her masters want to see her in a schoolgirl’s haircut and dress in a simple western manner. She is worthless to the masters unless she does as they please, rather than as she wills. The poet also brings out the fear she has as she sits crushing the pinecone of fear oblivious of the fact that it is fear she is dealing with (River Teeth 135-7).
Looking at the aquarium with the goldfish seems like looking into a lantern, giving her a green light that looks like a souvenir from the underworld. The idea is to gather all the hope she can get to console herself despite her situation. Like a mermaid, she can watch from the sidelines everything happens and then go back to the underworld where she could live happily without worrying about the rest of the people in the room (Bock 220).

We ship free to anywhere in the world via FedEx or DHL expedited service with online tracking.
In 1889, whilst Matisse was recovering from an operation his mother provided him with some art materials. It was during this period that he decided he wanted to be an artist, thereby greatly disappointing his Grain Merchant father.

This is an upgrade from the standard giclee print, it is print on cotton canvas(thick is 320 gsm), waterproof, We use acid-free cotton canvas with archival inks to guarantee that your prints last a lifetime without fading or loss of color. All art prints including white edges of 2.5″ inches to allow for future stretching on stretcher bars.
Our Show-shop, You can also Click here to tour our studio. 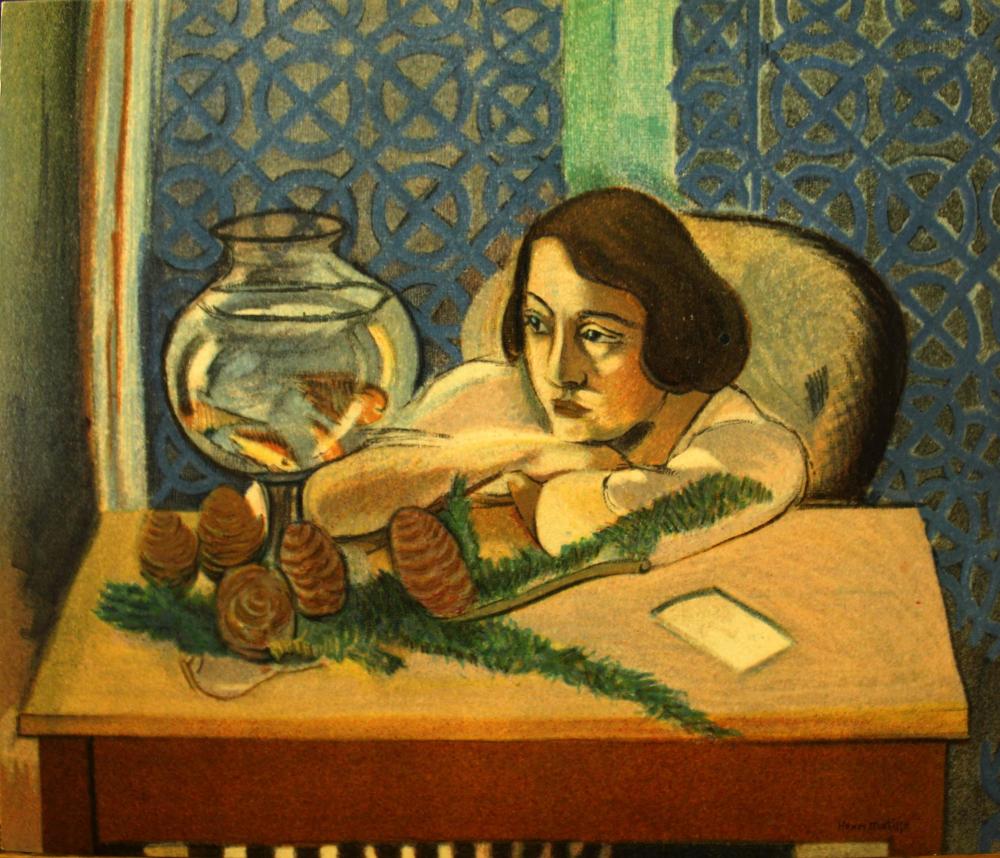 7. Withdrawal Prior to Sale: Great Dane Auctioneers reserves the right to withdraw any property before the sale and shall have no liability whatsoever for such withdrawal.
We will ship all over the world. Buyer pays shipping and we will calculate the shipping price at the end of the sale. If the buyer wins multiple lots, we will combine shipping. All of our boxes are packed in house by a professional packer using the best and safest materials for shipping.