Ad Parnassum (1932) is considered to be Paul Klee’s masterpiece and the best example of his pointillist style; it is also one of his most finely worked paintings. Ad Parnassum was created in the Dusseldorfer period. With 100 x 126 cm (39 x 50 in) it is one of his largest paintings, as he usually worked with small formats. In this mosaic-like work in the style of pointillism he combined different techniques and compositional principles. Influenced by his trip to Egypt from 1928 to 1929, Klee built a colour field from individually stamped dots, surrounded by likewise stamped lines, which results in a pyramid. Above the roof of the “Parnassus” there is a sun. The title identifies the picture as Apollon’s and the Muses’ place.
Around 1930 Klee often made use of this pictorial structure, which recalls the Pointillism of the late nineteen century. ‘Divisionism’ was his name for it. A further geometrical element appears within the ‘divisionist’ structuring – a triangle which, with no definite outline, exists solely by virtue of variations in the tonal gradations applied to the little squares. As a result, the picture seems multi-layered, spatial and suffused with light. One genealog of modern colour-light painting would progress from Georges Seurat to Klee. However, Klee was hardly interested in the theories of colour so essential to Seurat. He simply made use of a pictorial method which, although its possibilities were soon exhausted, helped him to create a number of masterful works.

Ad Parnassum was painted in 1932, a time when many critics view Klee to have been very much at the peak of his creativity.
It is one of Paul Klee’s largest paintings, and is considered a masterpiece by many due to its incredibly complex nature and design, featuring tiny individually stamped dots in patterns which microscopically form semi recognisable shapes and objects. Seurat is the most famous pointilist artist.

«Ad Parnassum», since 1935 on permanent loan to Bern’s Museum of Fine Arts, courtesy of the Friends of the Museum, is in turn on loan to the Zentrum Paul Klee for the duration of the exhibition – the first time the masterpiece has left the museum in 14 years. Elaborate testing showed that it was possible to transfer the famous yet fragile work to the nearby Zentrum Paul Klee. The delicate state of the relatively large painting is an outcome of the execution of the work: Klee was fond of experimentation – not just in terms of form and content, but of technique, too. «Ad Parnassum» saw the artist employ a combination of casein binder paints and oil paints that have become brittle with the passing years. Splits in the paint have weakened its adhesion to the base, such that vibration and fluctuations in temperature and humidity could cause irreparable damage to the work. Paul Klee himself detailed the fragile structure of the painting:
The works currently on display afford a representative overview of Paul Klee’s development as a painter, from his early pictures and artistic experiments in the late 19th and early 20th centuries to his self-discovery as a painter through his membership of the Blue Rider group, and from his tutorial activities at the Bauhaus between 1921 and 1930 and at the Düsseldorf Academy of Fine Arts to his late work created in Bern between 1934 and 1940. The focus of the exhibition – its crowning glory, if you will – is the masterpiece «Ad Parnassum» (Latin for «at/to Parnassus»), dated 1932, around which the entire exhibition revolves both chronologically and thematically. The items chosen to accompany «Ad Parnassum» were selected for their importance and their capacity to represent the Zentrum Paul Klee collection – many of them are works to which Paul Klee himself gave his seal of approval by inscribing them with the designation «Sonderklasse» (special) and reserving them for his estate collection.

He was called only “the unique” by his fellow artists: Paul Klee (1879-1940) shaped the understanding of modern art like no other. With its mosaic composed works, he created a completely new style.
A trip to the North African Tunis in 1914 with his painter friends, August Macke and Louis Moilliet helps clover of new joy of colour and a rush of creation. “The colour is me. I don’t have to hunt for it. It took me forever, I know that. This is the happy hour sense: the colour and I are one. I am painter. “He notes in his diary. Innumerable watercolours, which he followed his him alone own style developed. 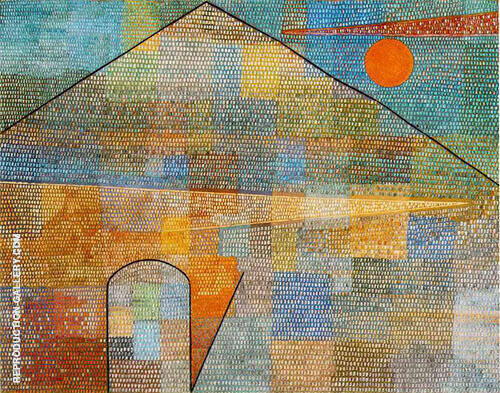 Your painting will be shipped rolled in strong plastic tubing, ready for stretching and/or framing locally. This is the conventional method of transporting hand-painted oil on canvas. Learn more about how your painting is shipped.
We are able to offer a framing service intercontinental U.S. Please contact us if you would like a quotation. Alternatively, should you prefer, we can recommend a framer in your area.