The painting is one of the earliest cubist paintings. While it is frequently mentioned in monographs, textbooks and articles on the artist as well as Cubism, this painting has never been a source of serious controversy. Most of his paintings consist of still lives which are remarkable for their low-key colour harmonies, robust construction, and serene, meditative quality. Cubism is the technique that was used in the creation of the Portuguese painting. Georges Braque introduced this technique of painting in 1911. The painting features stencilled letters BAL and numerals under them. The painter first introduced the still life technique in 1910 before introducing the Cubism style.
While working on this painting, Georges Braque combined the two techniques to come up with the Portuguese. The stencilled numbers and letters in the art are the assertions of realistic intentions of the Cubism technique. In the painting, the stencilled or written letters across the surface represent the most conclusive ways of emphasizing the picture’s two-dimensional character and they also help stress the quality of the artwork. The Portuguese painting marks an interesting stage and point in the development of Georges’ arts. At the top right-hand corner of the painting, there are D BAL letters and numerals under them. Although Georges had included various numbers as well as letters into the painting, they were the representational elements of the art. 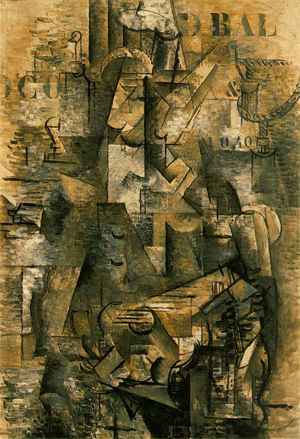 Braque admired the work of the Fauves, who were a small group of artists that were known for their wild, vibrant art style. Along with the admiration of the explosion of colors, Braque followed the works of Matisse, Duffy, Derain, and others (Bordvick).
Georges Braque – A Focus on Cubism by Pamela L. Tucker