The success of this painting dates back a very long way and even had a poem written in respect of it by William Carlos Williams. W. H. Auden’s poem MusГ©e des Beaux-Arts also comments on the work as well and that piece of literature was named after the museum in Belgium where it can now be seen on display, and has been for many years. This remains one of the most impressive art museums across the country and is well worth a visit, if only to see the original Fall of Icarus in person.
The Landscape with the Fall of Icarus painting is believed to have been completed around the 1560s and there still remains some question marks over whether Pieter Bruegel the Elder was in fact the original artist but no other painters have ever been linked to it. The classic work can now found on display in the Royal Museums of Fine Arts of Belgium and is held within their permanent collection, being one of the museum’s major attractions.

If you look carefully, you can see his legs as he drowns, in the far distance of the painting. They are dwarfed by the horse’s rump …
© Bridgeman Art Library / Royal Musuems of Fine Arts of Belgium

Landscape with the Fall of Icarus is a painting in oil on canvas measuring 73.5 by 112 centimetres (28.9 in × 44.1 in) in the Royal Museums of Fine Arts of Belgium in Brussels. It was long thought to be by the leading painter of Dutch and Flemish Renaissance painting, Pieter Bruegel the Elder. However, following technical examinations in 1996 of the painting hanging in the Brussels museum that attribution is regarded as very doubtful, and the painting, perhaps painted in the 1560s, is now usually seen as a good early copy by an unknown artist of Bruegel’s lost original, perhaps from about 1558. According to the museum: “It is doubtful the execution is by Breugel the Elder, but the composition can be said with certainty to be his”, although recent technical research has re-opened the question.
Largely derived from Ovid, the painting is described in W. H. Auden’s famous poem “Musée des Beaux-Arts”, named after the museum in Brussels which holds the painting, and became the subject of a poem of the same name by William Carlos Williams, as well as “Lines on Bruegel’s ‘Icarus'” by Michael Hamburger. 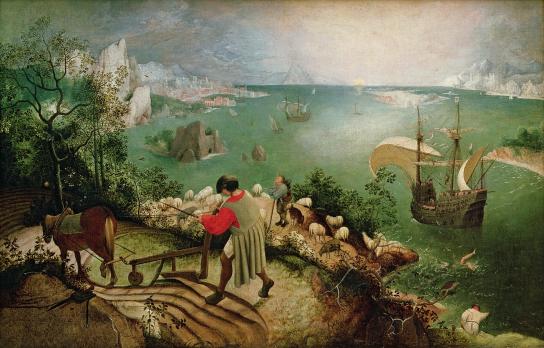 The Fall of Icarus, Pieter Bruegel (c. 1525-69) inspired several poems, two of which are included below, which spoke to the painting’s depiction of human ambition as well as humankind’s indifference to suffering.
Landscape with the Fall of Icarus