The viewer receives quite a shock in moving from the apocalyptic emotion of Composition VII to the geometrical rhythm of Composition VIII. Painted ten years later in 1923, Composition VIII reflects the influence of Suprematism and Constructivism absorbed by Kandinsky while in Russia prior to his return to Germany to teach at the Bauhaus. Here, Kandinsky has moved from color to form as the dominating compositional element. Contrasting forms now provide the dynamic balance of the work; the large circle in the upper left plays against the network of precise lines in the right portion of the canvas. Note also how Kandinsky uses different colors within the forms to energize their geometry: a yellow circle with blue halo versus blue circle with yellow halo; a right angle filled with blue and an acute angle colored pink. The background also works to enhance the dynamism of the composition. The design does not appear as a geometrical exercise on a flat plane, but seems to be taking place in an undefined space. The layered background colors – light blue at bottom, light yellow at top and white in the middle – define this depth. The forms tend to recede and advance within this depth, creating a dynamic, push-pull effect.
Wassily Kandinsky was one of the most original and influential artists of the twentieth-century. His “inner necessity” to express his emotional perceptions led to the development of an abstract style of painting that was based on the non-representational properties of color and form. Kandinsky’s compositions were the culmination of his efforts to create a “pure painting” that would provide the same emotional power as a musical composition. The exhibition “Kandinsky: Compositions”, organized by Magdalena Dabrowski and on display at the Los Angeles County Art Museum until September 3, 1995, presents these monumental works together for the first and possibly last time and provides an opportunity to witness the creative process of Kandinsky. 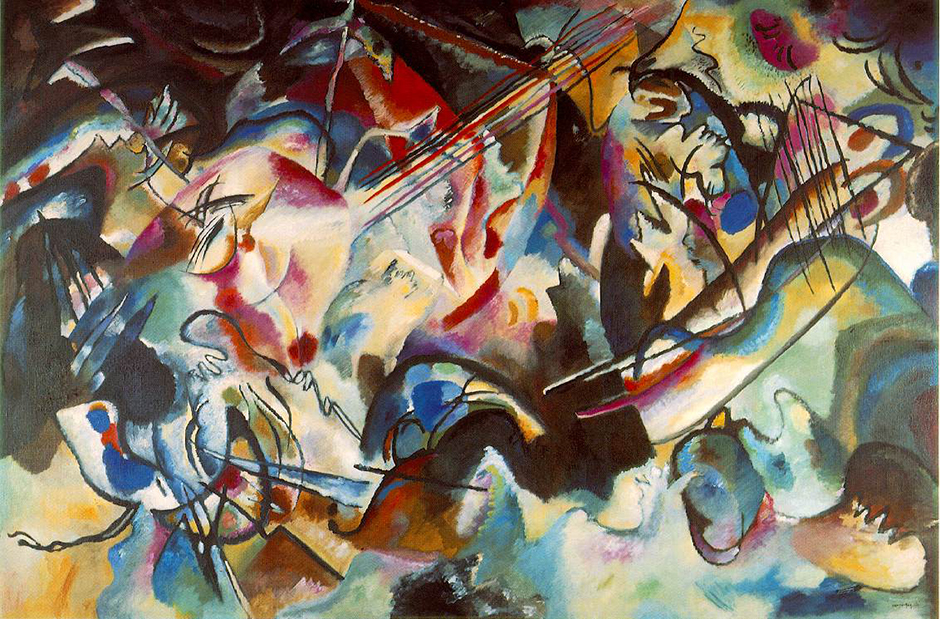 Lastly, there are compositions. They represent the supreme and most consistent form of abstract painting with no direct links to reality. Colored spots and lines create an elemental force of movement that takes the breath away. // Composition VI, 1913
Kandinsky himself described the pivotal moment when he happened to glance at one of his pictures resting sideways against a wall. In it he suddenly saw “an indescribably beautiful picture saturated with inner fire, consisting exclusively of colored spots.” It dawned on him that objectivity was detrimental to his pictures. // Composition IX, 1936 This breakthrough work is a deceptively simple image – a lone rider racing across a landscape – yet it represented a decisive moment in Kandinsky’s developing style. In this painting, he demonstrated a clear stylistic link to the work of the Impressionists, like Claude Monet, particularly evident in the contrasts of light and dark on the sun-dappled hillside. The ambiguity of the form of the figure on horseback rendered in a variety of colors that almost blend together foreshadow his interest in abstraction. The theme of the horse and rider reappeared in many of his later works. For Kandinsky this motif signified his resistance against conventional aesthetic values as well as the possibilities for a purer, more spiritual life through art.
The rational, geometric order of Composition VIII is a polar opposite of the operatic composition of Composition VII (1913). Painted while he taught at the Bauhaus, this work illustrates how Kandinsky synthesized elements from Suprematism, Constructivism, and the school’s own ethos. By combining aspects of all three movements, he arrived at the flat planes of color and the clear, linear quality seen in this work. Form, as opposed to color, structured the painting in a dynamic balance that pulses throughout the canvas. This work is an expression of Kandinsky’s clarified ideas about modern, non-objective art, particularly the significance of shapes like triangles, circles, and the checkerboard. Kandinsky relied upon a hard-edged style to communicate the deeper content of his work for the rest of his career. 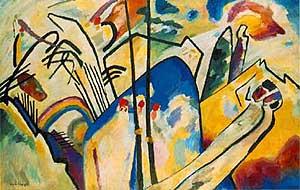 Kandinsky developed his idea of the correspondence between a work of art and the viewer, and called it “Klang” (sound or resonance). His famous quote accurately describes his appreciation for both music and art: “Color is the power which directly influences the soul. Color is the keyboard, the eyes are the hammers, the soul is the piano with the strings. The artist is the hand which plays, touching one key or another, to cause vibrations in the soul.” During Kandinsky’s period of artistic development, he divided his paintings into three main categories: “Impressions” (which still show some representational elements), “Improvisations” (which convey spontaneous emotional reactions), and “Compositions” (which are his ultimate works of art, and he created them after much preparation thus throughout his life he completed only 10 “Compositions”).
From 1903 onward, Kandinsky’s art was exhibited throughout Europe but caused much controversy among the public and art critics. Kandinsky heavily influenced some of the 20 th century art movements and became co-founder of the Blue Rider or Der Blaue Reiter. The Blue Rider movement was mostly made up of German artists and was the main point in German Expressionism but it also opened the doors for free spirit and originality in painting. Kandinsky’s Improvisations became the first “abstract” pictures and allowed for the Blue Rider movement to begin. His first work in this mode was completed in 1910, the year in which he wrote an important theoretical study, Concerning the Spiritual in Art. In this work he examines the psychological effects of color with analogies between music and art. In 1914 Kandinsky returned to Russia where he stayed until 1921. In 1922 he came back to Germany to teach and work at the Bauhaus in Dessau until 1933. At the Bauhaus, Kandinsky had his most productive and prolific time but in 1933, when the German Nazis came to power, all modern art was considered as degenerated art and the Bauhaus was closed. Kandinsky’s works were removed from German museums and confiscated. Kandinsky then moved to Neuilly near Paris where he remained and continued painting until his death in December 1944. Overall Kandinsky developed his own style that was expressive and colorful and he helped develop the expressionist form of painting. Compositions were also the expression of inner visions, but on a grander, more ambitious scale. The most appropriate analogy for a Composition is that of a symphony, with their meticulous planning and complex structure. Between 1910 and 1939, Kandinsky painted ten large Compositions. Composition IV, below, still features partially identifiable objects and therefore is representational of a transitional stage on Kandinsky’s path to abstraction.
Improvisations were spontaneous expressions of a mood or a feeling. One example is Improvisation 11 (1910). This Improvisation contains numerous allusions to the representational world: a dog in the foreground; a boat of people being rowed across a stormy lake; two cannons, a group of figures armed with lances, two galloping armed riders, and the suggestion of buildings. The animated composition can be said to be almost narrative.