Given that the official triptych images won’t display properly unless I push them way down the page, let me provide a bit of additional background on Max Beckmann. He was denounced by the Nazis in 1937 and left Berlin immediately for Amsterdam. In that sense, he left before things got completely untenable in that country for those that the Nazis turned on. I definitely share with him this belief that when things start going bad, you don’t stick around to find out how they turn out. I generally don’t find things take much of a turn for the better.
The Argonauts (1949-50)

The Beginning was inspired by a dream which Beckmann recorded in his diary in April 1946: “I just had an absurd and unpleasant dream in which somehow a Puss-in-Boots played a role that made me mighty ridiculous”. He started work on the painting in Amsterdam in October 1946, noting: “already today a draft from ‘Puss-in-Boots’, becoming quite interesting”. In January 1947 he records starting on the side panels of the work, referring to them now as ‘L’Enfance’ (Childhood), and later on as ‘Jeunesse’ (Youth).
 Expressionist Movement (1880s onwards)
Germany, France, Belgium, Europe, America.

Such an interpretation of the left picture is reinforced by the right one, as this clearly depicts the expulsion from Paradise. The name of the hotel [ED]EN is a clear reference to this. The complete name can be seen on the boy’s cap. In addition we see the strange figure, whose long, pointed head is similar to that of the Egyptian god Seth, but whose feathers and sword indicate an Old Testament cherub, who guards Paradise after the Fall of Man and one of whom is driving away the couple in this picture. There was a large hotel in Berlin called the Eden and Max Beckmann was a frequent visitor there over many years. Now the name of the hotel represents Berlin, a former paradise, and being turned away means going into exile. The couple go on their way with a serious, pained look, the woman on the back of the man. It is therefore a self-portrait, even if the man in the picture does not directly resemble the artist.
The yellow bag on the ground is labelled “DA ORIENT[E] SUMAT [LUX]”, a well-known expression, which in another version is stated as “EX ORIENTE LUX” – light comes from the east. Was Max Beckmann using this expression, which was originally a reference to the birth of Christ, to allude to the events of the day? At the end of January 1943, when his work on the triptych was far from over, the German army had suffered serious losses in Stalingrad. For many this was a turning-point in the war. It is possible that the artist added this expression of hope after these events took place. Many of his diary entries show that he was following the unfolding of the war in Russia. For example on 30 June 1942 he wrote: “Renewed fighting in Russia” or on 10 July: “Enormous battles in Russia”, on 2 July 1943: “Sevastopol has fallen” and on 6 July: “Fighting has broken out in Russia again”. 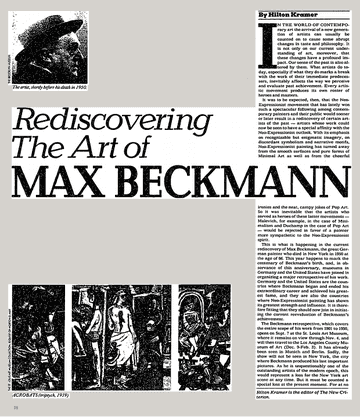 MAX BECKMANN has reemerged as an exemplary figure: a master painter and graphic artist who, in eschewing the tendency toward abstraction and estheticism, persisted in the belief that great art requires great themes and archetypal subjects for its full realization.
The change had actually begun to make itself felt in his drawings while he was still serving in the war. Somehow, even in that horrific atmosphere, he continued to draw, and he now took his subjects directly from the swarming, suffering life around him.