Johns worked on this target with a sort of deadpan irony to test what one expects a work of art to do. A painted target automatically negates the use of a real one, and its use is lost. It stops being a sign and becomes an image, where the center is not more important than the other circles that form it.
And so, in Target With Plaster Casts, two systems of seeing are locked in perfect mutual opposition, the sign becoming a painting and sculpture becoming a sign.

In the mid-1950s Johns incorporated symbols such as numbers, flags, maps, and targets into his paintings. Here, he transforms the familiar image of a target into a tangible object by building up the surface with wax encaustic. As a result, the concentric circles have become less precise and more tactile. Above the target Johns has added four cropped and eyeless faces, plaster casts taken from a single model over a period of several months. Their sculptural presence reinforces the objectness of the painting, particularly as the faces may be shut away in their niches behind a hinged wooden door.
If you notice an error, please contact us at [email protected]

Target With Plaster Casts” (1955) is a painting surmounted by a row of wooden niches holding casts of body parts: a hand, a foot, a penis, a breast. And each niche has a little flip-up door, designed to be opened and closed by viewers, to give them a different, more intimate art experience than usual. Of course, if you reach for them now, in a museum, you risk arrest. So the real message, which Mr. Johns must have anticipated, is: Touch, but don’t touch.
Each of these Target paintings by Johns features a depiction of an actual target that is, for all practical purposes, utterly interchangeable with the real thing. Yet unlike the flag or the number, which are also familiar images from this period of the artist’s career, the flat target is simultaneously representational and abstract (a number or a flag can never be divorced from its status as a familiar sign). This makes the target susceptible to other ambiguities. Targets imply, or are instruments of, seeing across space (and seeing as an act of potential violence). But the optical nature of the concentric bands can also be understood to figure distraction rather than focus, 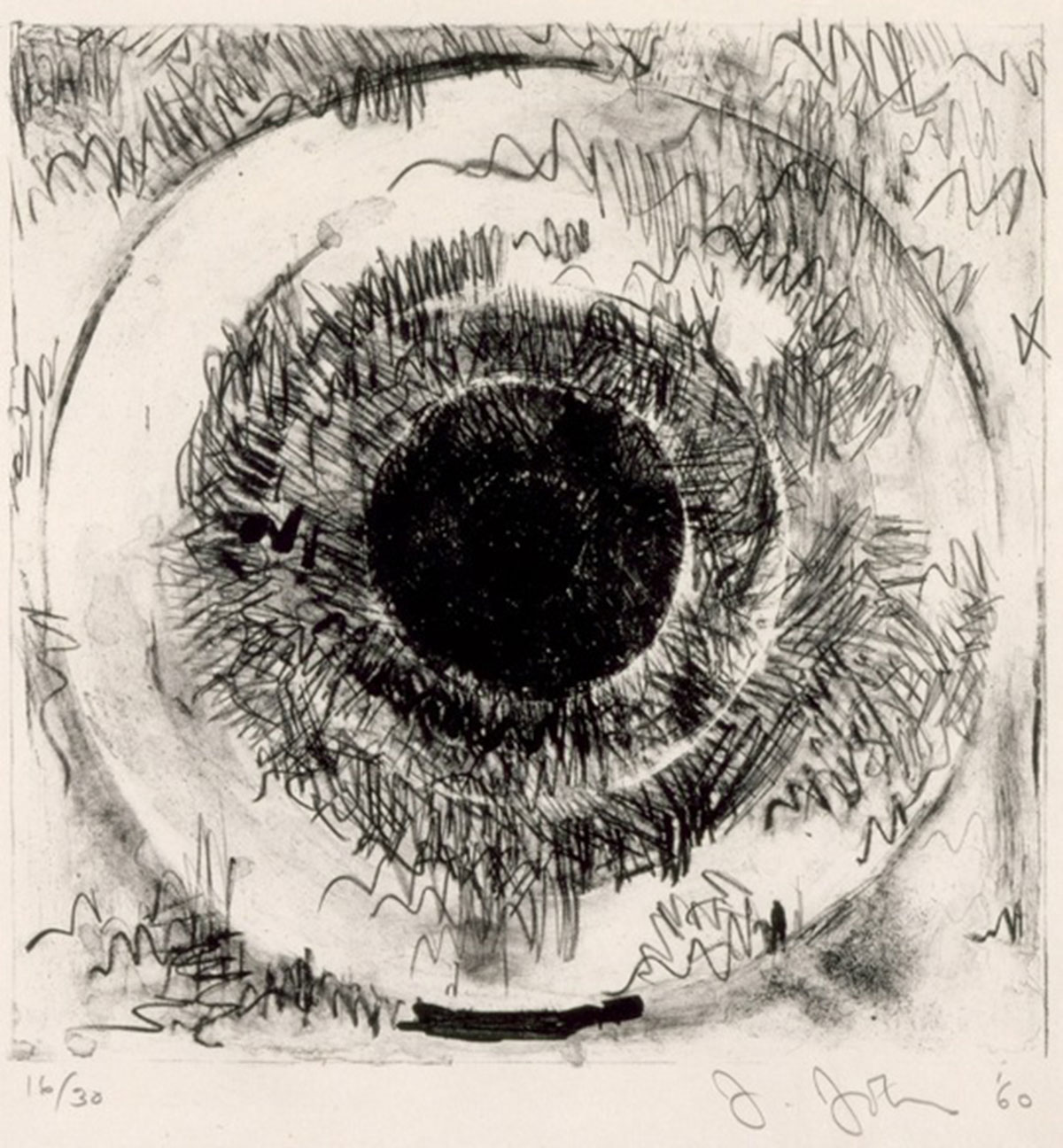 “Among these works, a lithograph from 1960 – at once target and eyeball – serves to drive home the essential ambiguity of the motif as it pertains to the idea of sight. A bull’s eye generally serves as a means of attracting and focusing the eye; thus, it is an apt, if provocative motif for a work of art, since most paintings and sculptures are also inert objects made for the purpose of being seen. Johns’ targets, which use the bull’s-eye motif to heighten the act of beholding, also seem to look back at the beholder, as if to challenge the basic assumption that one can view art without being seen in return.
“In 1955, Johns completed two works that stand alongside Flag as his most important early paintings,” writes Professor Isabelle Loring Wallace in our Jasper Johns Phaidon Focus book. “Entitled Target with Four Faces and Target with Plaster Casts they gave rise to several additional pieces in various media, all of them linked via the provocative imagery of the bull’s eye.