a recording of doctor gradus ad parnassum by debussy

Kenneth Caswell of Austin, Tex., refurbishes these early performances and the machines to reproduce them. This CD has five of the Book 1 “Préludes,” the “Children’s Corner,” “La Plus Que Lente,” “La Soirée dans Grenade” and “D’un Cahier d’Esquisses,” all reperformed on a restored Feurich Welte piano in Mr. Caswell’s home. Also included are acoustical recordings of Debussy and the soprano Mary Garden in 1904 performing the “Ariettes Oubliées” and a snippet from “Pelléas et Mélisande.” Both sound significantly remote, the equivalent of ruins.
In weaker moments, I even think I could get Debussy to like my way just fine, although I admit to feeling a little queasy every time I hear him play the piece for himself. The rolls were made in 1913, when the thought of performances frozen in time to be repeated verbatim and at will had scarcely occurred to anyone. The recording as snapshot was an idea that continued as far as the 1930s, when Artur Schnabel, recording Beethoven sonatas in Paris, declined to redo questionable takes. Dinu Lipatti’s recordings 10 years later were among the first to recognize that permanence without impregnability was not very permanent at all.

Selection Made Easy
Over 140 Years of Service 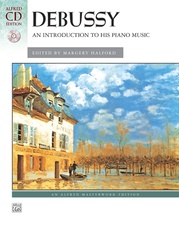 Debussy: An Introduction to His Piano Music
By Claude Debussy / ed. Maurice Hinson