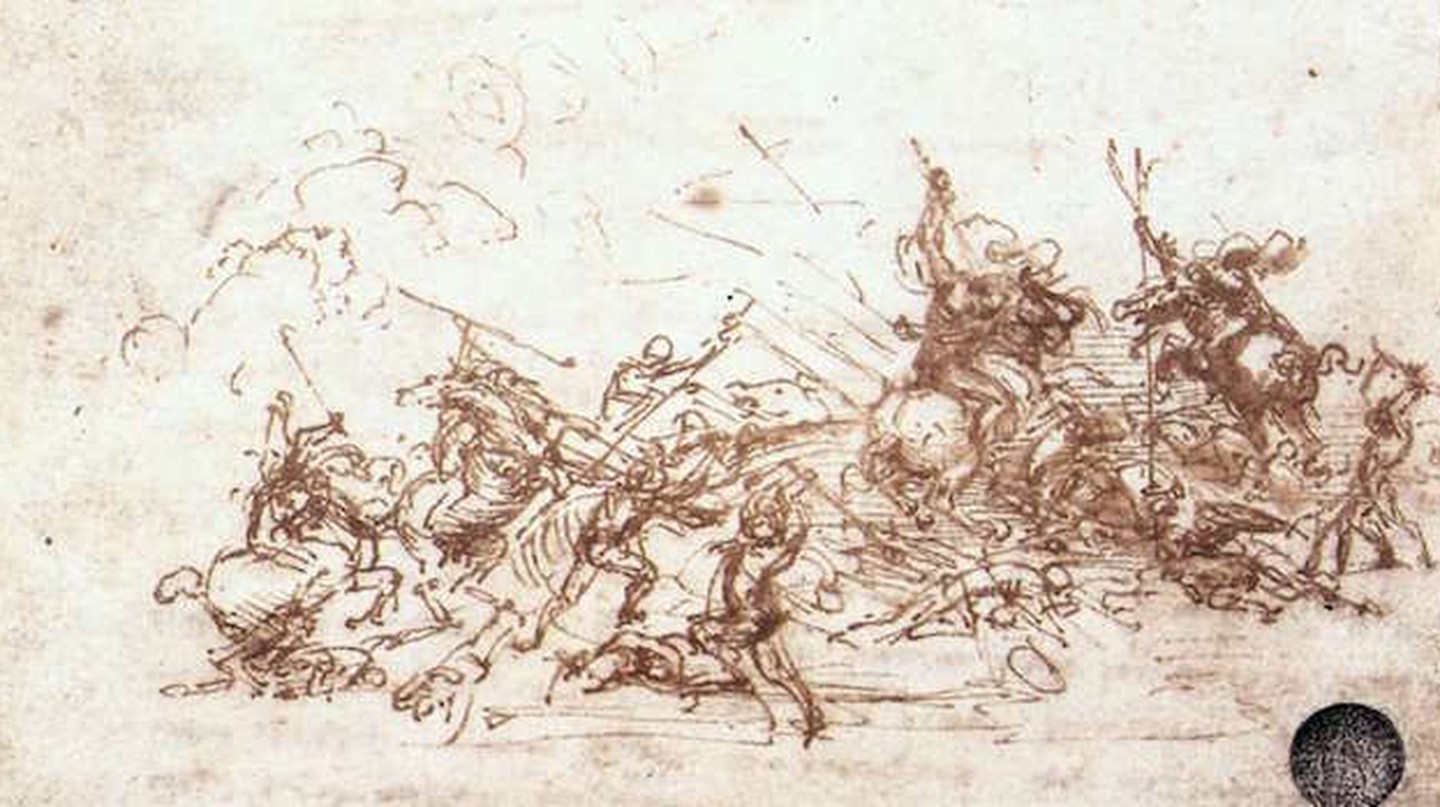 Trying to authenticate a centuries-old piece of art is never going to be an easy task, and oftentimes what one expert believes to be true another one will disagree with. Case in point — La Bella Principessa (The Beautiful Princess), which after a lot of research by Martin Kemp, world-renowned expert on Leonardo, and Pascal Cotte, was deemed to be by the Renaissance great. Depicting Bianca Sforza in profile, who was mostly likely a young teenager at the time, this artwork is a drawing of colored chalk and ink. And while not every expert agrees with Kemp, there are many who do believe it.
Leonardo da Vinci was known for his notebooks filled with sketches, drawings, ideas, texts and so on. The Codex on the Flight of Birds is a rare treat that is rarely on display. It is kept out of display in order to protect it and allow it be around for future generations. What makes the work even more special is that in 2009, researches discovered what they believe to be a self-portrait of a younger Leonardo hidden among some of the handwriting. 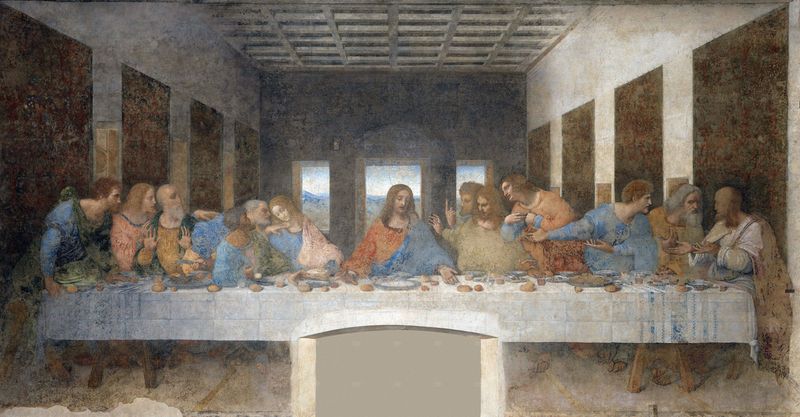 One of the most famous paintings in the world, the Last Supper was commissioned by Ludovico Sforza, duke of Milan and Leonardo’s patron during his first stay in that city, for the Dominican monastery of Santa Maria delle Grazie. Depicting a sequential narrative, Leonardo illustrates several closely connected moments in the Gospels, including Matthew 26:21–28, in which Jesus declares that one of the Apostles will betray him and then institutes the Eucharist. Leonardo, who was intrigued by the manner in which a man’s character can reveal itself in posture, expression, and gesture, depicted each disciple’s unique reaction to the declaration. The Apostles’ postures rise, fall, extend, and intertwine as they appear to whisper, yell, grieve, and debate around Jesus, who sits serenely in the center. Because of Leonardo’s experimental painting technique, in which he used tempera or oil paint on two layers of preparatory ground, the work began to disintegrate soon after he finished it. Viewers, however, can still recognize it as a complex study of varied human emotion, revealed in a deceptively simple composition.
The world’s most famous artwork, the Mona Lisa draws thousands of visitors to the Louvre Museum each day, many of whom are compelled by the sitter’s mysterious gaze and enigmatic smile. The seemingly ordinary portrait of a young woman dressed modestly in a thin veil, somber colors, and no jewelry might also confound its viewers, who may wonder what all the fuss is about. The painting’s simplicity belies Leonardo’s talent for realism. The subject’s softly modeled face shows his skillful handling of sfumato, an artistic technique that uses subtle gradations of light and shadow, rather than line, to model form. The delicately painted veil, the finely wrought tresses, and the careful rendering of folded fabric reveal Leonardo’s tireless patience in recreating his studied observations. Moreover, the sitter’s perplexing expression only adds to her realism. Her smile might be engaging or it might be mocking—viewers can’t quite figure it out because, like a human, she is a complex figure, embodying contrary characteristics simultaneously. 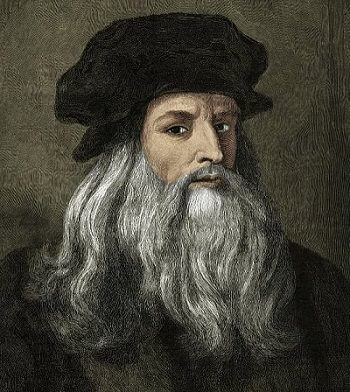 It was perhaps because of his desire to fine-tune this technique that his other surviving painting from his years in Milan, The Last Supper, deteriorated so quickly. The artist used oil-based paint on plaster for this scene of Jesus and his apostles at the table because his customary water-based fresco paints were difficult to blend for the sfumato effect he sought. Within only a few decades, much of the painting had flaked away from the wall in its location at the Santa Maria del Grazie convent. The canvas of Leonardo da Vinci’s “Last Supper” that now hangs in the Louvre is, in large part, a reproduction of the failed fresco.
Much of his other creative output during his time with Verrocchio was credited to the master of the studio although the paintings were collaborative efforts. Over the years, historians have closely examined such Verrocchio masterpieces as The Baptism of Christ and The Annunciation to weigh in on which specific figures da Vinci was responsible for. In the “Baptism of Christ,” which dates to 1475, experts speculate that one of the angels is da Vinci’s own work, while in “The Annunciation,” produced within the same time period, experts detect the work of the apprentice artist’s brush in the angel’s wings and the background. In fact, historians x-rayed “The Annunciation” to definitively distinguish between Verrocchio’s heavier brush strokes with lead-based paint from da Vinci’s lighter, water-based paint strokes.

It wasn’t until 2011 that experts revealed that one of the supposed “copies”—specifically, the one that had once sold for $60 (about $510 today)—had been misidentified, and was actually da Vinci’s original work.
A painting that went for $60 in 1958 sold for a record $450 million at a Christie’s auction in November 2017, the highest price ever paid for a painting. That’s because the piece—known as Salvator Mundi, or “Savior of the World”—was identified as a work by Leonardo da Vinci in 2011. Painted around the same time as the Mona Lisa, it is one of fewer than 20 known paintings by the Renaissance master.

Leonardo has often been described as the archetype of the “Renaissance man”, a man whose seemingly infinite curiosity was equalled only by his powers of invention. He is widely considered to be one of the greatest painters of all time and perhaps the most diversely talented person ever to have lived.
It is primarily as a painter that Leonardo was and is renowned. Two of his works, the Mona Lisa and The Last Supper occupy unique positions as the most famous, most reproduced and most parodied portrait and religious painting of all time, their fame approached only by Michelangelo’s Creation of Adam. Leonardo’s drawing of the Vitruvian Man is also iconic. Perhaps fifteen of his paintings survive, the small number due to his constant, and frequently disastrous, experimentation with new techniques, and his chronic procrastination. Nevertheless, these few works together with his notebooks, which contain drawings, scientific diagrams, and his thoughts on the nature of painting, comprise a contribution to later generations of artists only rivalled by that of his contemporary, Michelangelo.