a parable on human aspiration. Daedalus and his son, Icarus, were imprisoned on the island of Crete. Daedalus created wings to fly away. Icarus, ambitiously, flew too near the sun. The wax holding his wings together melted and he plunged into the sea and was drowned.

Landscape with the Fall of Icarus is described in W H Auden’s famous poem Musée des Beaux-Arts , named after the museum in Brussels which holds the painting.

The subject matter is an obvious starting point and the title tells the viewer quite a lot. Although a variety of activities may be taking place, the way the figures and objects relate to each other (foreground, background, at the margins of the frame) reveal something of the painter’s priorities. Size matters: if you are not viewing the original in an art gallery, you should at least work out the proportions of a picture and its impact (ranging from intimate cameo to larger-than-life and all the gradations in between). This leads into the area of perspective and how the spectator’s viewpoint is manipulated – how distant or how close the objects might be and whether we are outside or inside the space the painting occupies.
If you already have some skills of visual analysis or feel comfortable with literary critiques of twentieth-century poetry, then both the painting and the poem may prompt you to ask questions about their form and composition. If not, then you can follow the guidelines below; these will help you to analyse artistic and literary techniques in the retelling of the myth. In these separate boxes you will find a brief biography of Brueghel and Auden plus a few central characteristics (or ‘tools of the trade’) of their chosen genres which can be fruitfully applied to their texts. 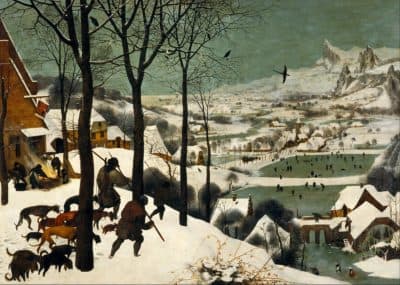 Conservators and curators know better than ever, through careful examination of brush strokes and pigments and X-rays, which paintings are the authentic masterpieces and which are imitations or copies. They can follow a painting, like a poem, from its “first draft” to its final, finished version, including painted-over areas from decades — or centuries — later. Oberthaler told me that, for example, one of the hunters trudging in “Hunters in the Snow” was a later addition by Bruegel, and that the crow looking away from the crucifixion scene in “Christ Carrying the Cross” was originally looking directly at the events — which in some way is further evidence that “The Fall of Icarus,” in which bystanders ignore the central tragedy, must have been copied from an original Bruegel.
The Netherlandish artist Pieter Bruegel the Elder (1525-1569) is one of the most admired painters in the history of Western art. His ravishing and poignant “Hunters in the Snow” is one of the world’s best loved paintings. And he’s especially loved by poets. William Carlos Williams was awarded a posthumous Pulitzer Prize for his 1962 collection “Pictures from Brueghel and Other Poems,” which includes his extraordinary series that gives the book its title. (The “h” in Bruegel, once commonly used, is no longer considered correct.) And one of the great poems about art is W.H. Auden’s “Musée des Beaux Arts” (from 1938, on the brink of world-wide suffering), which is about a painting called “Landscape with the Fall of Icarus” in the museum in Brussels that gives the poem its title. a splash quite unnoticed
it was
Icarus drowning.
Consider Icarus, pasting those sticky wings on,
testing this strange little tug at his shoulder blade,
and think of that first flawless moment over the lawn
of the labyrinth. Think of the difference it made!
There below are the trees, as awkward as camels;
and here are the shocked starlings pumping past
and think of innocent Icarus who is doing quite well:
larger than a sail, over the fog and the blast
of the plushy ocean, he goes. Admire his wings!
Feel the fire at his neck and see how casually
he glances up and is caught, wondrously tunneling
into that hot eye. Who cares that he fell back to the sea?
See him acclaiming the sun and come plunging down
while his sensible daddy goes straight into town. In a snow-covered landscape, three hunters lead their dogs through a picturesque, sprawling village. Vivid silhouettes of winter trees dominate the left-hand side of the composition, and, along with the direction of the hunters’ movement, lead the eye towards the busy scene at the center, a happy gathering of people on a frozen river. In the background, buildings and snow-covered mountains recede into the distance beneath a blue-gray winter sky.
In one of his more lurid and chaotic paintings, Bruegel offers us a dense allegorical representation of the competing drives underpinning human character by showing the customs associated with two festivals closely aligned in the early-modern calendar. To the left, the figure of the Carnival holds sway: a fat man astride a beer barrel with a pork chop pinned to its front, spit-roasting a pig and wearing a meat pie as a helmet. He presides over a scene populated by jesters, revelers, musicians, thieves, and beggars. To the right, the gaunt figure of Lent, in the habit of a nun, extends a platter of fish, in defiance of his richer offerings. Behind her, hooded figures emerge from the archway of a church, in which the artworks are shrouded in the custom of the season of abstinence. To the other side of the canvas, the tavern provides an equivalent backdrop, standing for the sins and pleasures of the flesh.