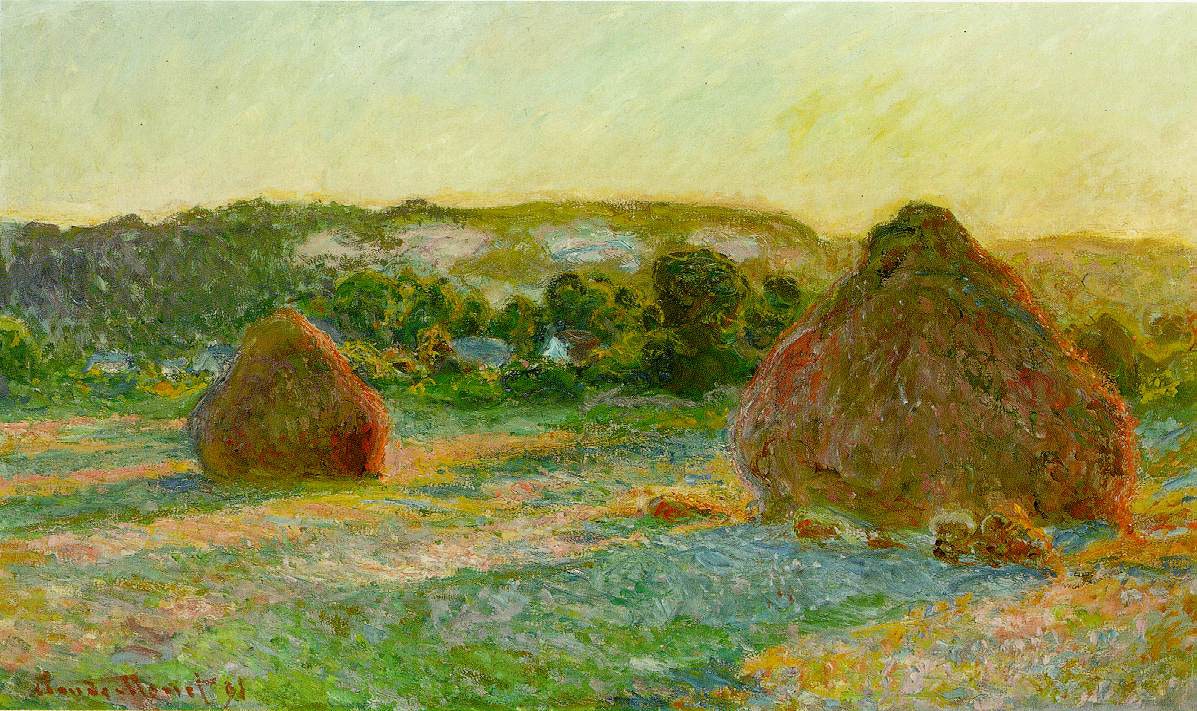 Beginning in 1890, Claude Monet spent one year painting giant stacks of wheat. Here is his journal from that time.
Confession: I ate a little piece of wheat this morning because I was wondering if I ate enough wheat, would a wheatstack form in my stomach? And, if so, would I be able to paint it? What if I opened my mouth and let some light in? What would a stack of wheat look like inside my stomach with, say, 10:45 A.M. winter light shining in on it? 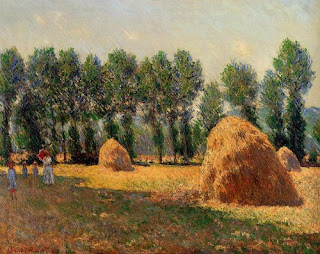 Stacks of wheat are also a traditional symbol of the persistence of rural tradition – in a time of increasing industrialisation and urbanisation at the end of the nineteenth century. They also symbolise the continuity of the agricultural cycle over the centuries, the fertility of the land, the wealth of local farmers and the general prosperity of the area.
In 1890 a particularly large stack was erected close to the wall of Monet’s Giverny property – as can be seen in a painting by Theodore Robinson.

Though often described in terms that suggest that Monet was concerned only to depict what he saw before him, individual and comparative studies of the works shows that he in fact altered the composition in some cases for purely pictorial ends. Likewise the coloring and arrangement of some of the light effects seem to have been enhanced on occasion. At the time that they were painted the rural subject-matter of the works was very topical as it tied in with contemporary assertions about the value of the French countryside and its agriculture. Industrially overshadowed in Europe by her enemy Germany as well as by Britain, national sentiments began, instead, to attach to the land and its people. Thus, in Monet’s paintings the farm buildings of the workers who had built the grainstacks are perfectly integrated into the landscape, suggesting the harmony of their lifestyle.
Though sometimes incorrectly called haystacks, the structures shown here are grainstacks, which were made by enclosing ears of grain in a coating of hay to protect them from the weather. The grainstack works of 1890-91 formed the first of Monet’s series, though he had painted a handful of works of the same subject in 1889. Consisting of 25 canvases in all, they were probably begun in August or September 1890 and were largely finished by February 1891; an exhibition of 15 of them was held in May 1891. The works were all painted near Giverny, where Monet had settled in 1883, and the series developed as he realized that he could not properly capture the light and atmospheric effects of the subject with only a few canvases. Some show one stack, some two and there are three paintings in which Monet depicted one stack from such a close viewpoint that the form is cut off by the frame. While the works were begun on the spot they were finished in the studio. In the background of each appears a more or less detailed landscape, with trees and farm buildings.

The Haystacks series was a financial success. Fifteen of these were exhibited by Durand-Ruel in May 1891, and every painting sold within days. The exhibit met with great public acclaim. Octave Mirbeau described Monet’s daring series as representing “what lies beyond progress itself.” Others described the grainstacks as “faces of the landscape,” and viewers seemed to take assurance that the series would help preserve rural traditions despite industrialization and urbanization. They represented the countryside as a retreat from daily problems and home for contentment with nature. Camille Pissarro said “These canvases breathe contentment.” Most of the paintings sold immediately for as much as 1,000 francs. Additionally, Monet’s prices in general began to rise steeply. As a result, he was able to buy outright the house and grounds at Giverny and to start constructing a waterlily pond. After years of mere subsistence living he was able to enjoy success.
Monet settled in Giverny in 1883. Most of his paintings from 1883 until his death 40 years later were of scenes within 3 kilometres (2 mi) of his home. Indeed, the haystacks themselves were situated just outside his door. He was intensely aware of and fascinated by the visual nuances of the region’s landscape and the variation in the seasons.